I wanted a Seven when I first saw one in the 1950's. I then became convinced I had to have one after driving a series 3 around Regents Park in the 1970's. However with a growing family and work commitments it took until 1992 to achieve my goal.

I bought a 1989 Cosworth BDR HPC in 1992. Reputed to be Justin Bells car, the log book was in another name, apparently his sponsor. Someone has confirmed he remembers Justin having a similar car so it may be true.

The car stayed largely original until 2002. The only major upgrades until this time were to fit a dry sump. Then in 2002 upgraditis struck with a vengeance.

I completely stripped the car and sent the engine to Roger King with the instruction "give me 220 bhp".  After a moments thought Roger responded "let me think about it and I will ring you back".  After a few days and not hearing anything I thought he had forgotten.  I was wrong!  He rang back saying  having given it great thought he would rise to the challenge.  In the meantime I de-rusted the chassis, applied liberal amounts of paint, fitted new shock absorbers, springs, wide track suspension, quick rack and rebuilt the car to a rolling chassis awaiting the engine.  Roger duly phoned to inform me the engine was ready and this was refitted without delay.

This is the car prior to upgraditis...

......And the classic look from the front 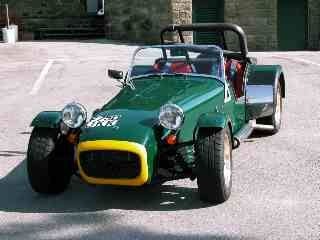 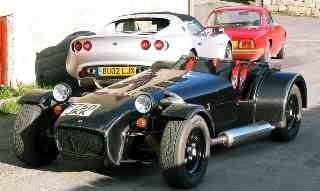 The lean and mean look 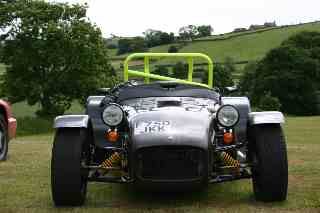