May 2014 I decided I was not comfortable in the Civic, I couldn't see the dash when the seat/wheel were in the position that suited me.

So I put it up for sale, in France. In the meantime I looked around at a replacement and this popped up. When new, in 2005 it was £14k and had £11k of factory options. The only major option not fitted is a sunroof - one thing less to go wrong.

So here it is. 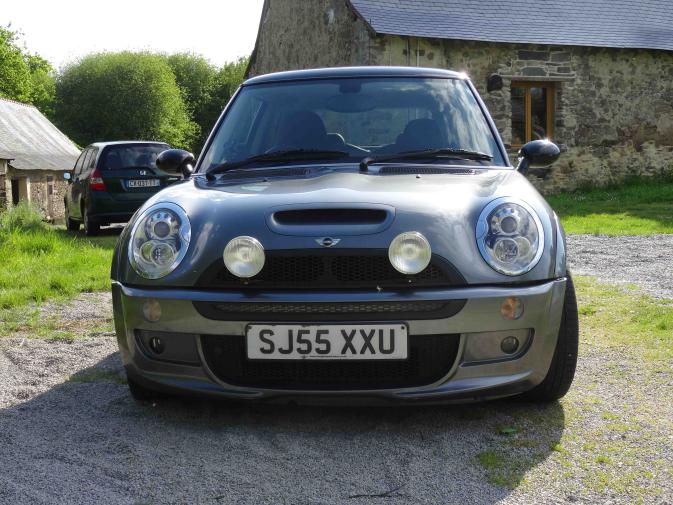 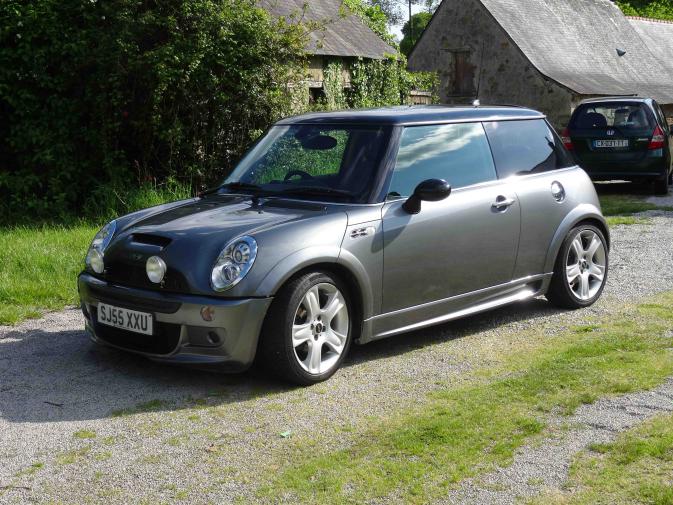 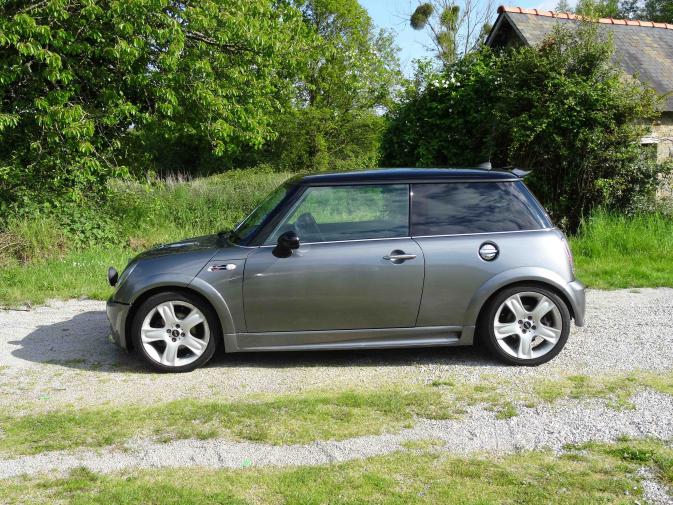 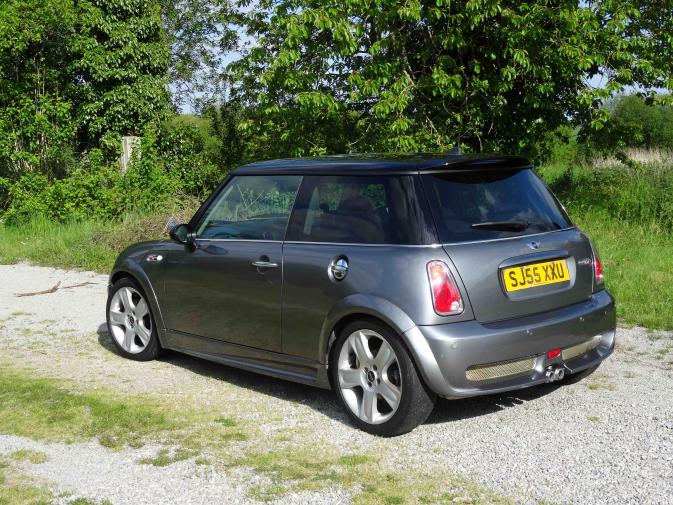 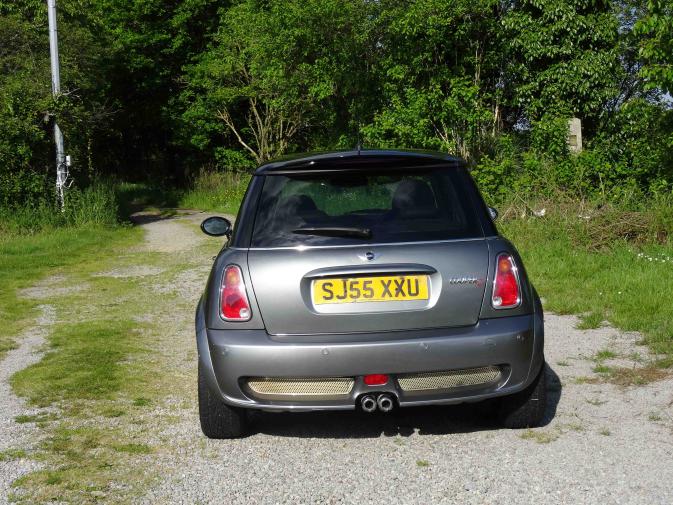 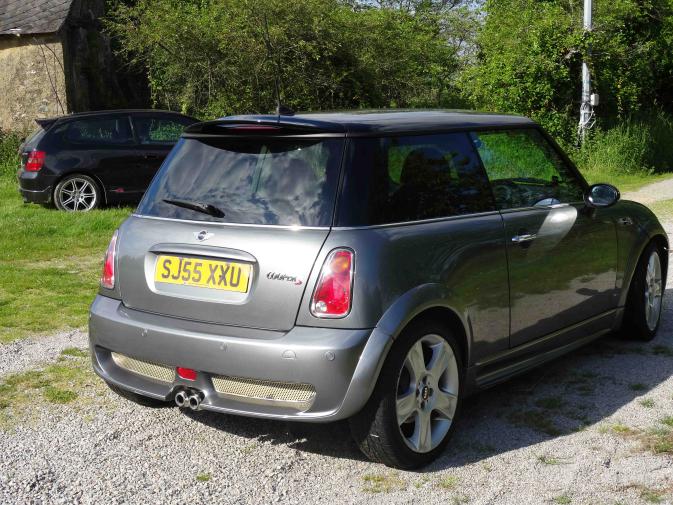 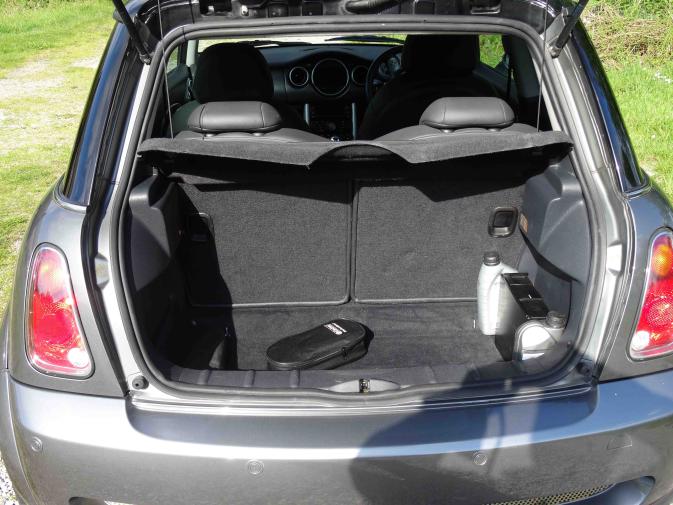 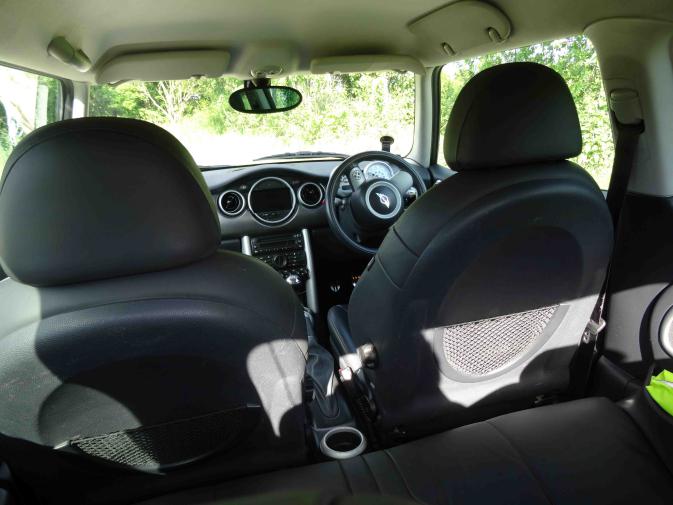 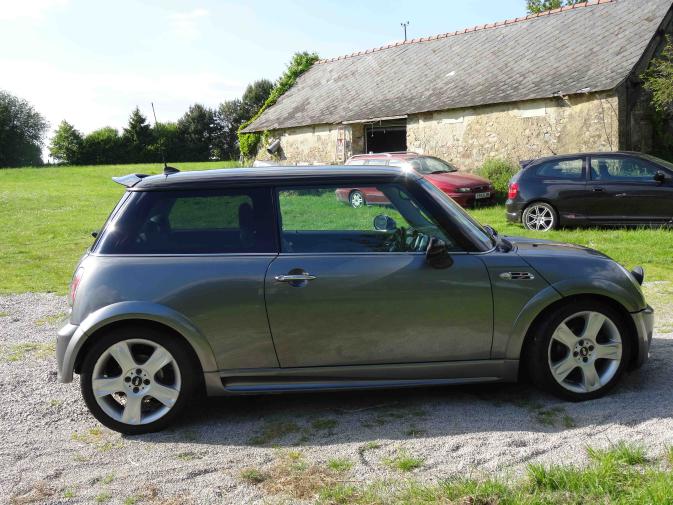 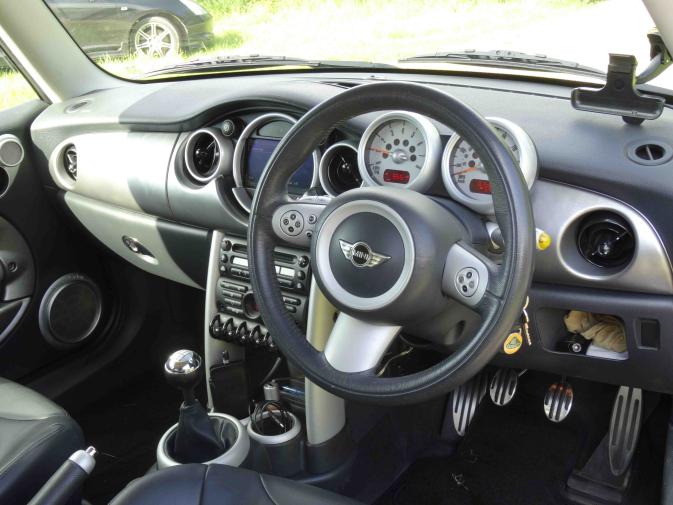 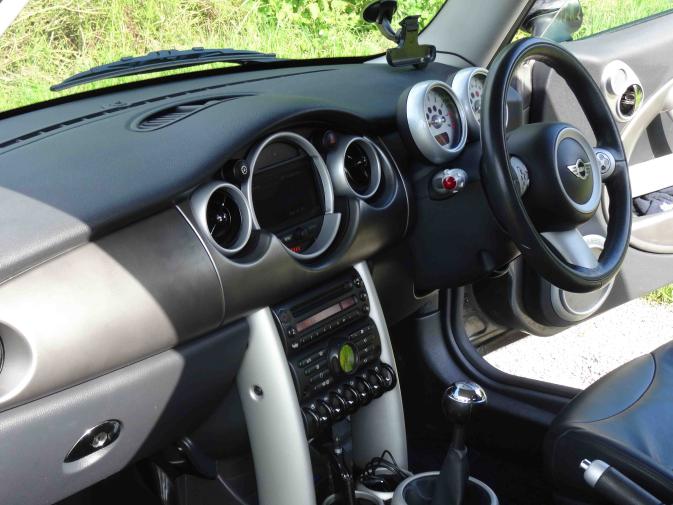 We went over to the UK on Wednesday 30th April, stayed in Portsmouth that night and got an early train to Glasgow, via Waterloo and Euston on Thursday. Picked the car up Thursday afternoon and drove to Preston. Another night With Lenny Henry and then to Portsmouth Friday morning and home for midnight. Was it worth it - YES, great car even if it is a BMW.

I'll take a picture of the original invoice when I get a minute. 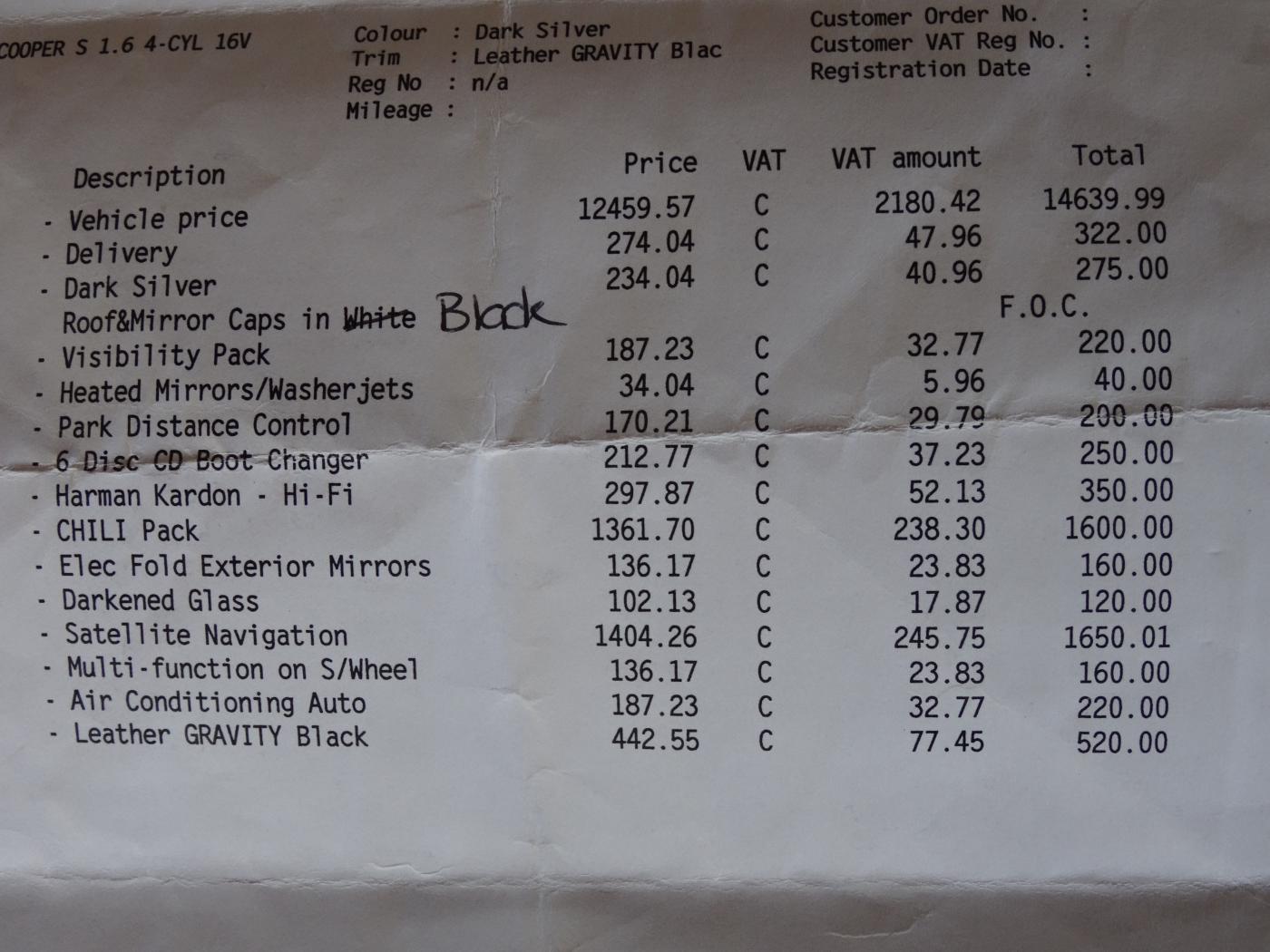 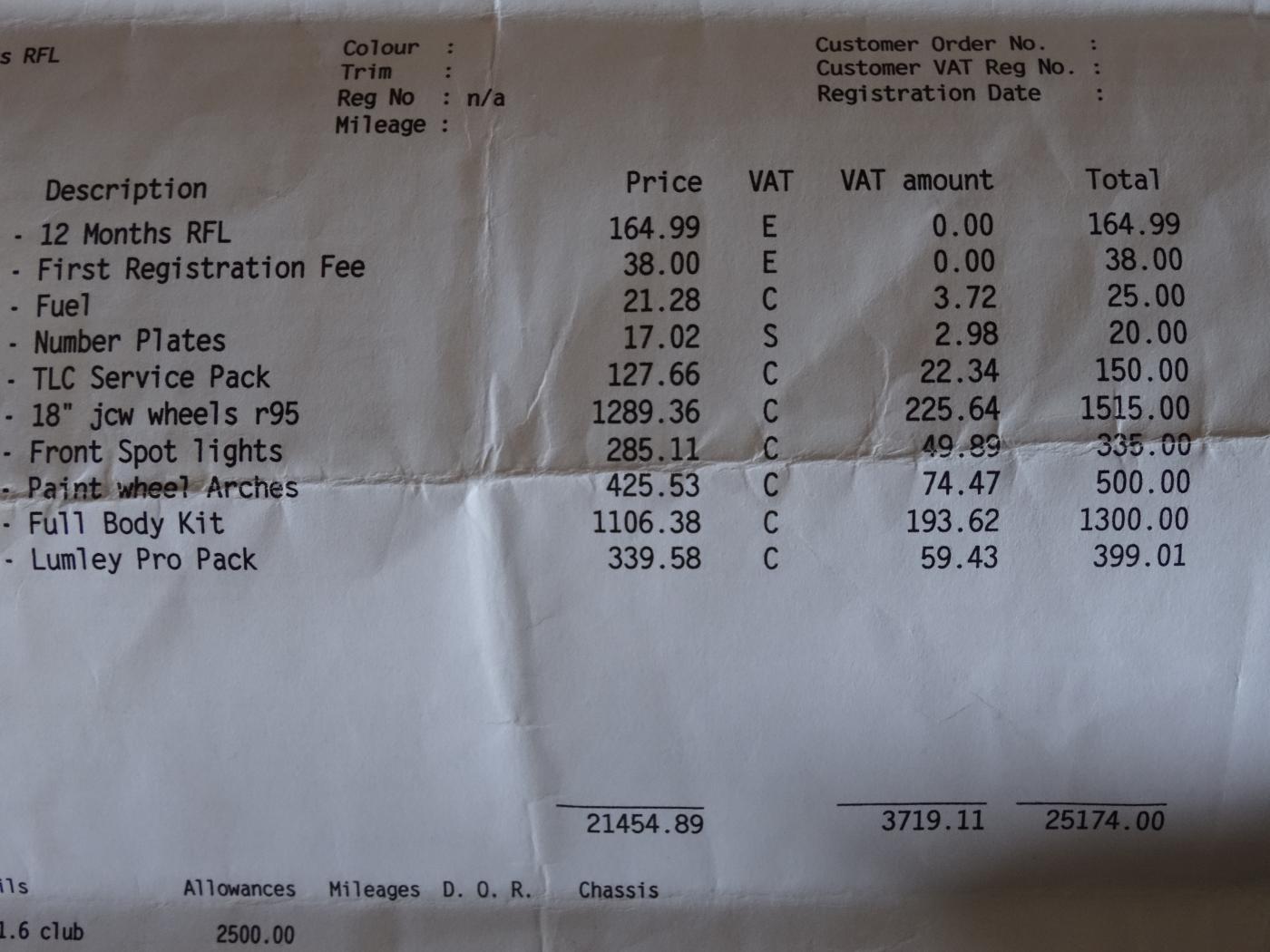 On the 10th May we set off early to Nantes to visit my favourite store - Ikea. (In France it's pronounced "Ee-key-ya". We do this every year to top up the stuff in the gites. However HM wanted to buy a decent set of knives (so she can cut her thumb off again, like the last time she used a sharp knife). Our son has told her about the magnetic strip Ikea have to hold knives on the wall. I showed her these 8 years ago but then she thought it was stupid idea! She also wanted to buy a new duvet and covers. Why remains mystery, which I will probably never solve. I wanted to get a couple of rails to hang all the stuff which is accumulating on the work tops, plus all the ladley type things, on the walls. When we got to the kitchen section I counted. Yes, for those of a certain age, I asked "20 questions", and got 19 "no's". Never mind I got what we needed and it's fine. The morning was spent getting all this stuff (plus 6 new cushions for when we visit the "Sparkling Water" show). We pay and leave, staggering under the weight of the bill, all together now , the Yorkshire Anthem - HOW MUCH! (about 350€). We need to get it all in the car and get lunch in the Chinese. I didn't take any pictures of this phase but the boot was full to the parcel shelf and 4 cushions had to go on one of the rear seats which was folded down,

After lunch we mount a further attack. Table mats and the magnetic strips are still outstanding then to the plant department for three large and 4 medium trifids and a couple of small ones.

She suggested we get some false one. Never, plants are real living things, no false crap in my house. In the event I picked up two false ones thinking they were real.

So this is what's going in the car: 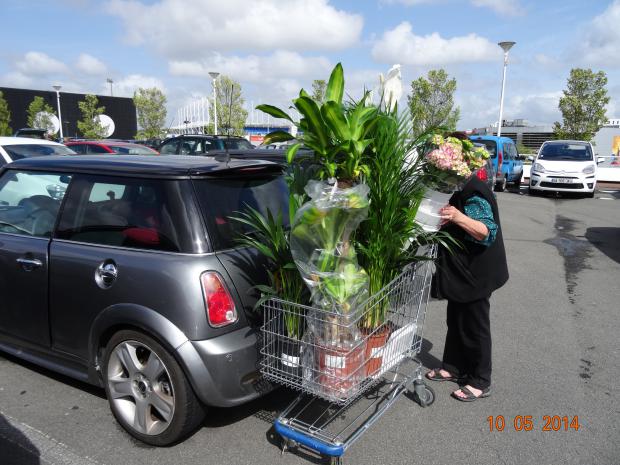 And this is it all packed. The passenger front seat is as far forward as it will go and HM sits there and sleeps most of the way back. 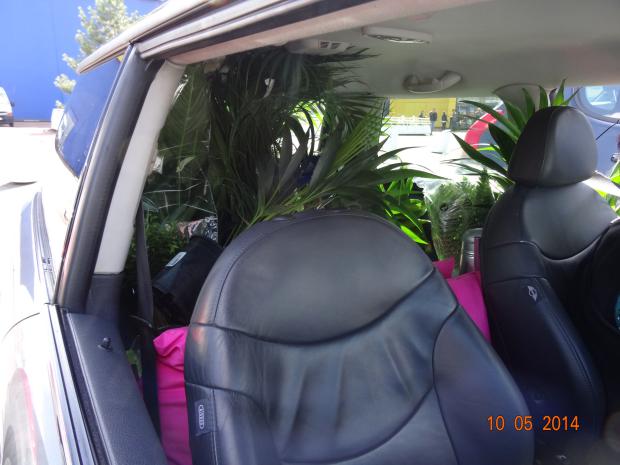 Amazing what can be got in these cars.

By the way, they are out of stock of the mag strips. Typical, eh. But the best thing is that when we get back and I open all the knife packaging, using one of the small paring knives which is very, very sharp (I only cut myself once and didn't need medical treatment) I find we've bought..... wait for it, have you guessed, yes, ceramic knives. No metal to be seen. I'm going to order the mag strips on the net and make up small metal plates and screw them to one side of the rubber handles and attach them that way.

This is the car upon our return from the UK. The wheels are now black and shod with new tyres. 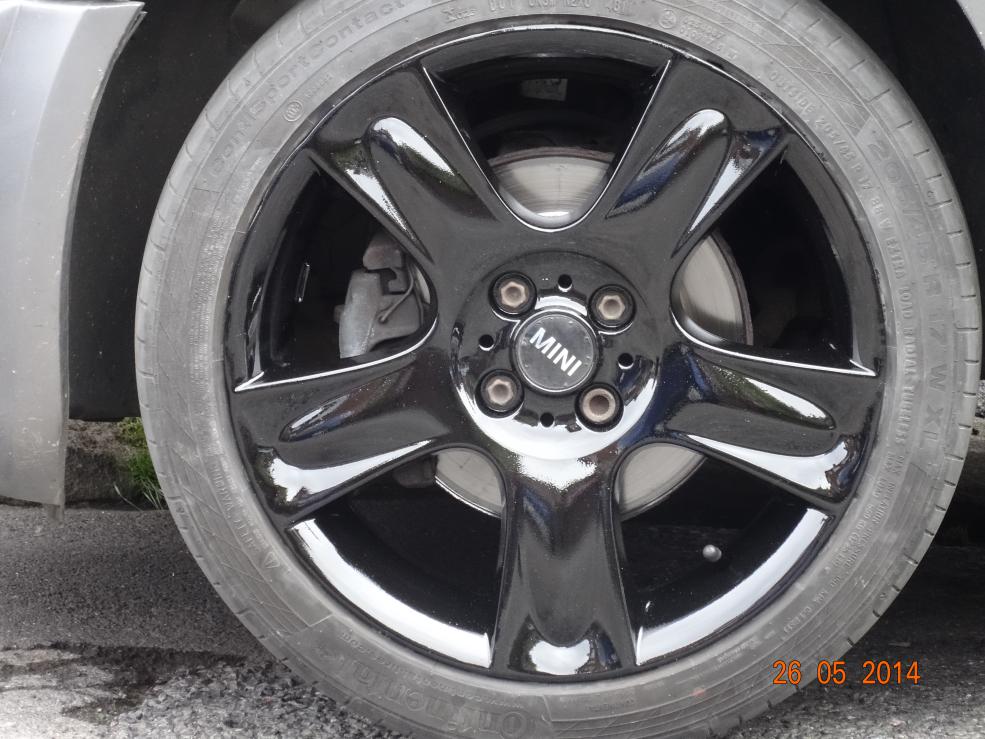 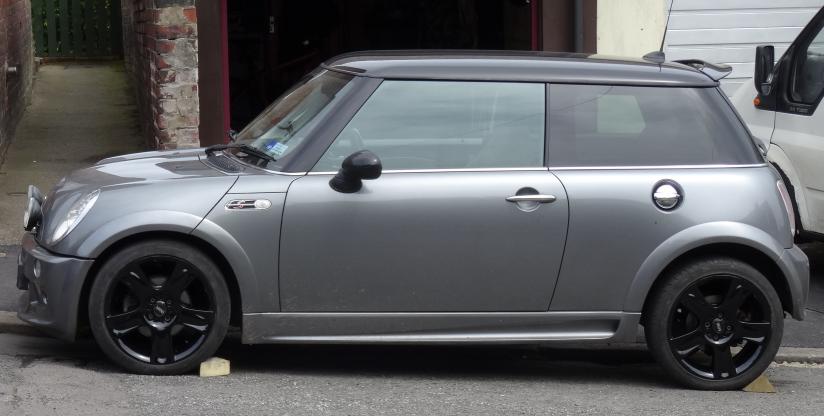 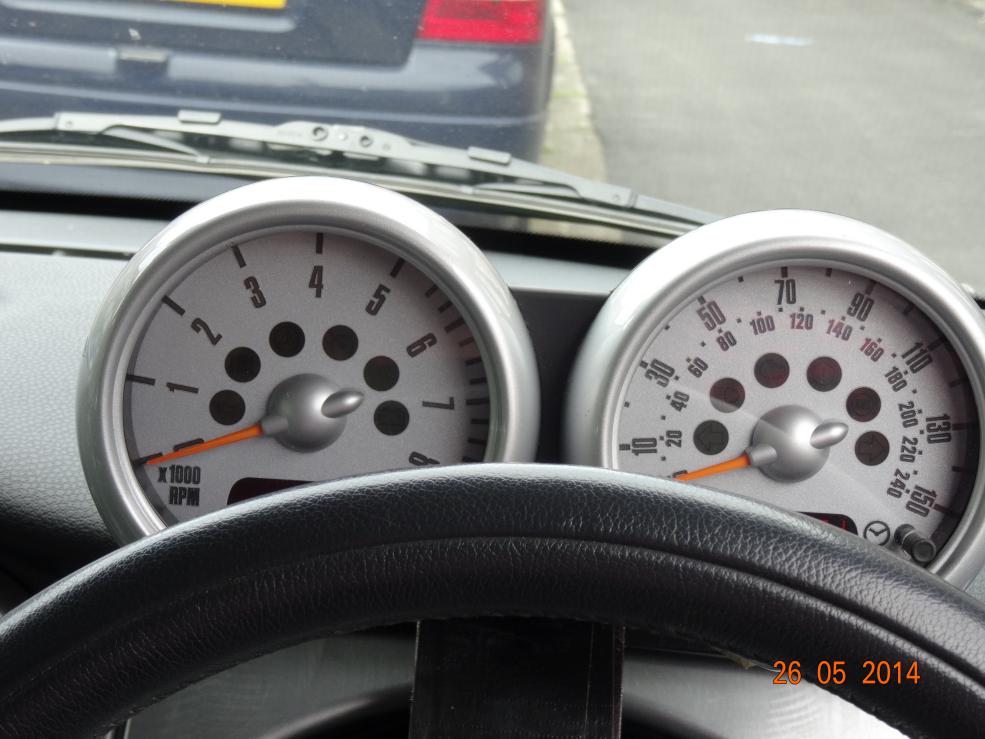 The speedo, can now been seen. Just needs some cosmetic work. 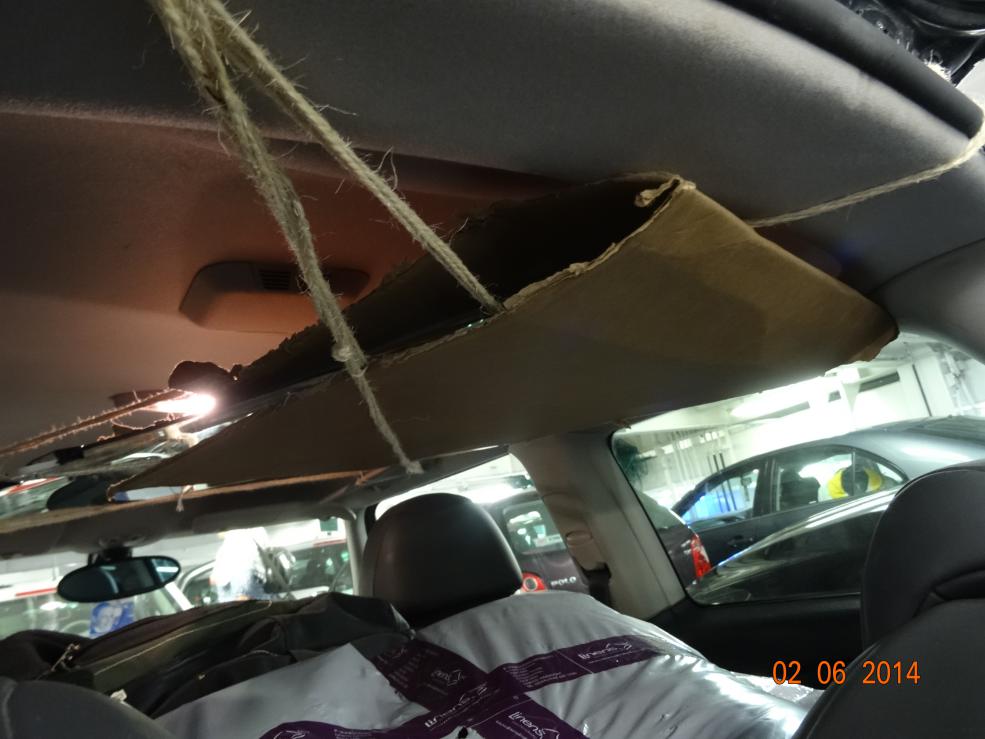 A Honda window on a hammock suspended from the roof. 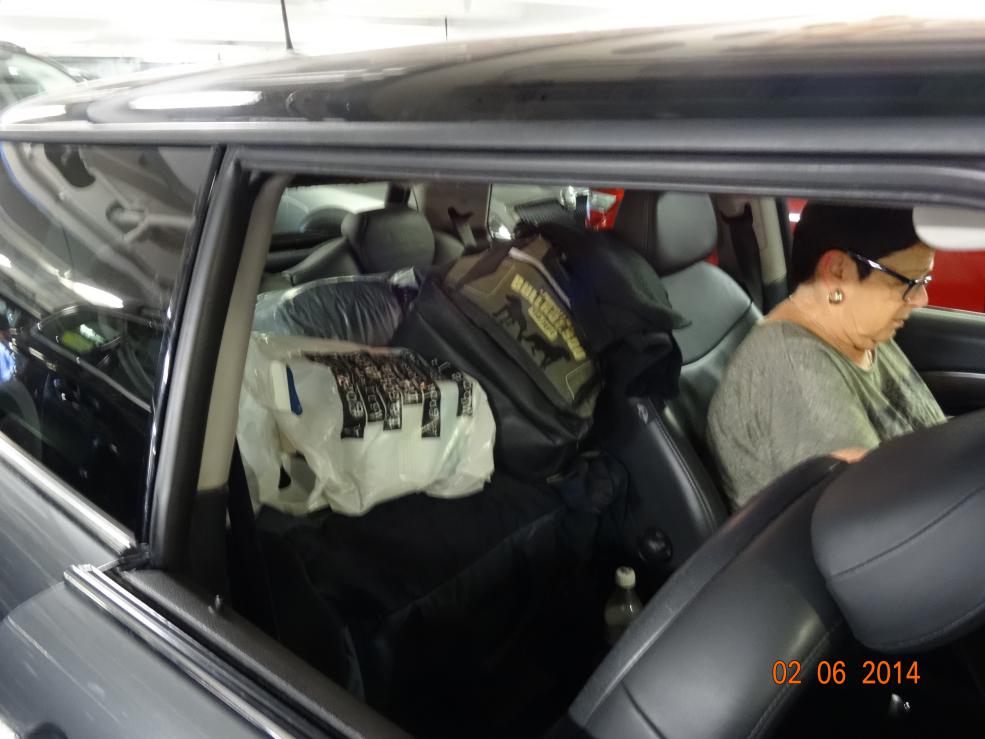 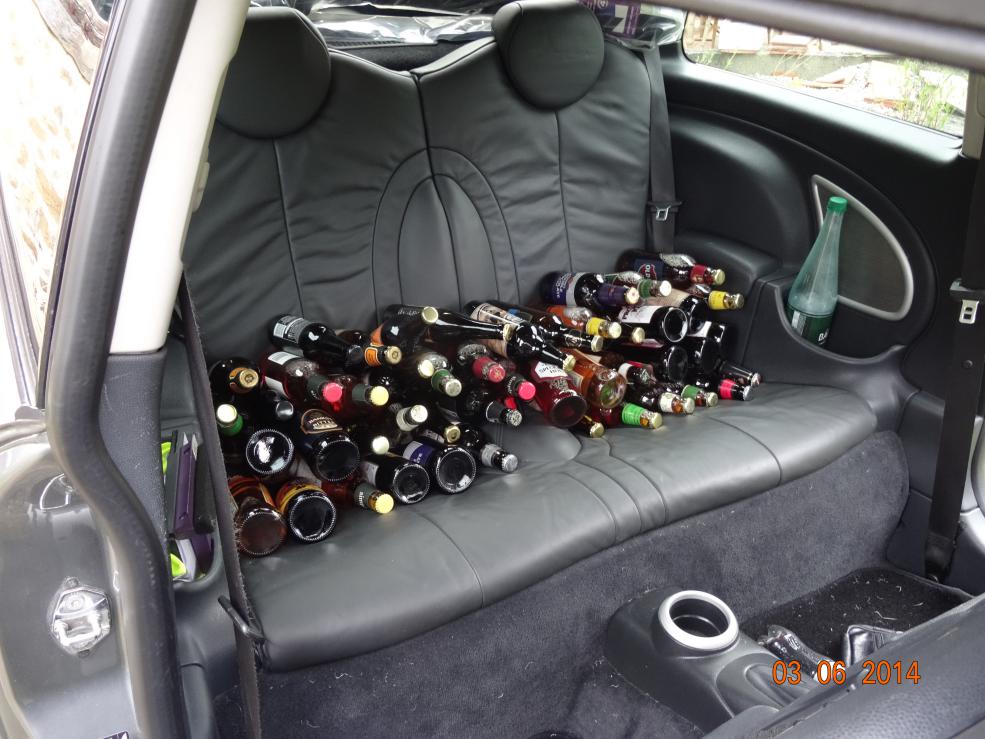 between these bottles and the several sports bags and carrier bags was an air rifle. I must find time to hoover the car, it's full of Hessian from the string used to make the hammock.

The French MOT (CT) in May 2014, highlighted a split steering rack gaiter and some surface rust on the front sub frame and two brake pipes. Due to my damaged vertebrae I haven't been able to do anything to the car.... until today. Today I jacked it up as high as I could (but it turned out not high enough) removed the wheels and started on the brakes. I removed the front calipers to change the front pads to Mintex 1144's. I painted the calipers with Kurrust and a French equivalent Also did the front sub frame and suspension and the rear calipers. Whilst all this was drying I started on the steering gaiter. Of course nothings easy, the ball joint had a rounded off Allen key slot so I had to jack the car up on the ball joint to put all the weight on the taper. Even then the thread was damaged and I couldn't get the nut off. A small triangular file along the top threads cured that and the ball joint was off. Then the track rod end wouldn't undo. After struggling for a while I got the oxy-acetylene out and heated it up. That did it and the TR off. Then to get the split gaiter off and the new one on. Getting it off was fairly easy but putting the new one on was a nightmare. I was trying not to have to lie under the car but had to to get the inner end of the gaiter over the rack. After a lot of shouting, screaming in pain and struggling to get to it, I got it on. Apart from my back I didn't have much room under the car, could have done with it being another foot higher. TR back on after cleaning the threads and applying copper grease.  Then the new pads and front calipers went on. Next problem, someone had rounded of the right hand bleed nipple. I had to cut the end off and hammer a 5/16" AF socket on it to undo it. Of course it had been over tightened. I'll get a new one next week when I'm in Angers. Then I painted the calipers red. In the morning Lynne and I will pump new brake fluid through the system and jobs done, after I clean the Kurust off the discs. When my back is better and I can lay on the floor I'll finish the sub frame and paint the underside in zinc and chassis black. 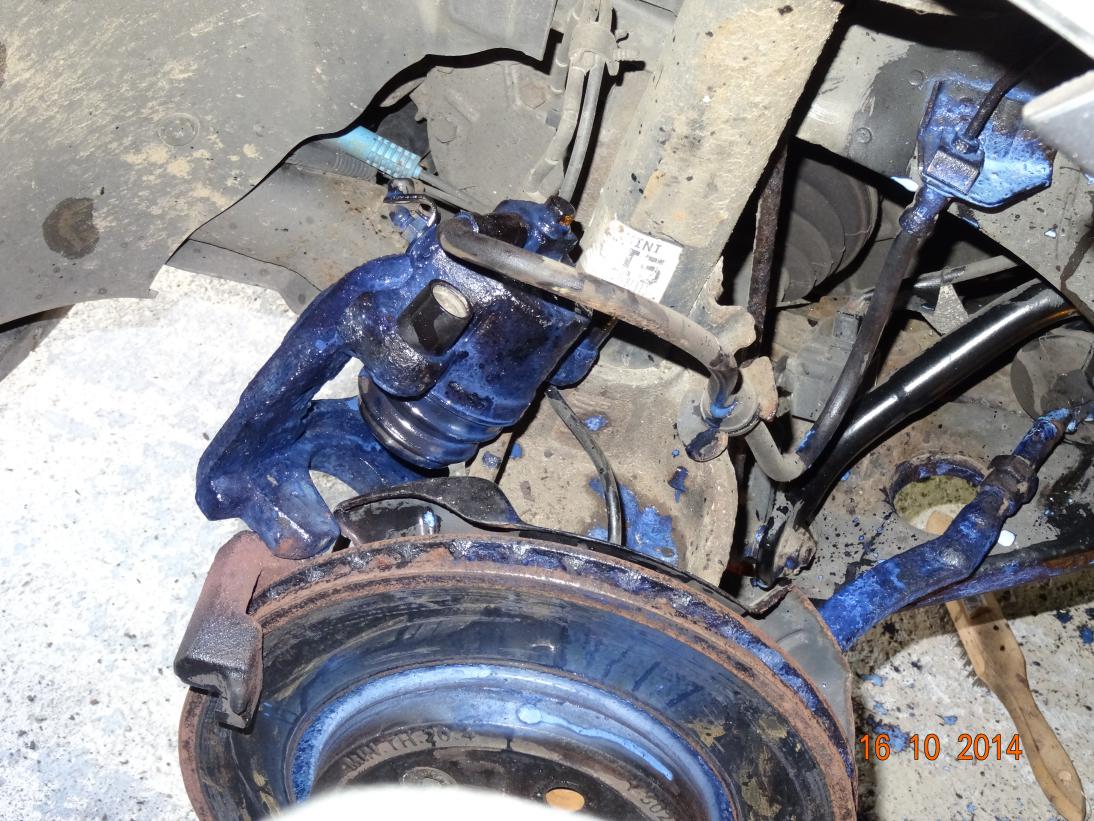 The blue stuff is the Kurust. 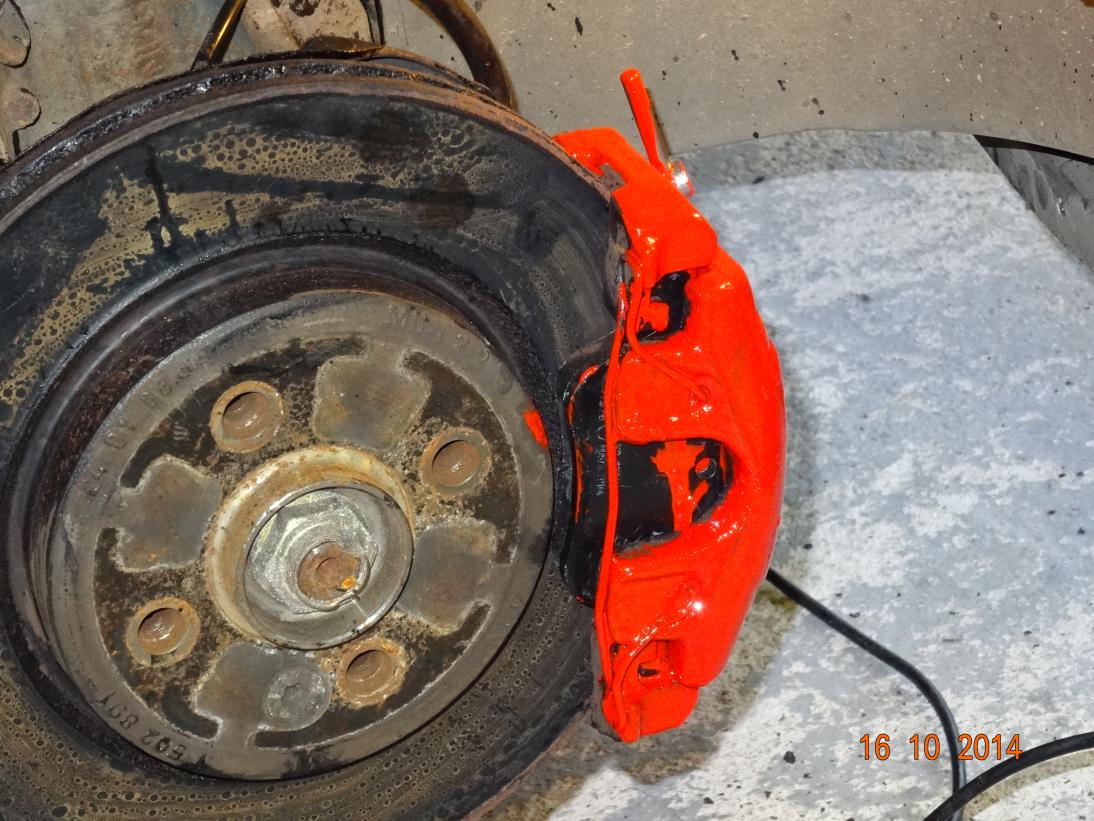 What do you think, I'm not sure. Time will tell and we'll see what it's like with the wheels on.