On Sunday 17th December 2006 I went for a blat. I was driving north along the N171 out of Pouance and travelling towards Renaze when a lady driver coming the other way turned left immediately in front of me. The road was very greasy having had no rain for a week and a light shower about and hour earlier. I swerved to avoid and the car skidded, turned through 135 degrees and hit the Armco on the opposite side of the road at about 60 mph. The impact was on the o/s/f wheel. The car then continued to spin and the o/s/r wheel and body hit the Armco before coming to rest.

I was in extreme pain but managed to get out the car. The lady who had caused the accident had stopped in the side road and came to see how I was. At the same time passing traffic began to stop and I found myself being "attended" to by an elderly gentleman who seemed to think that if he held my arm in a vice like grip I would either be OK or not escape.

I borrowed a phone from one of the bystanders and phoned Lynne. Knowing she would panic I took a deep breath and said "I've had a bit of an accident, I'm OK but can you come and get me".

By the time Lynne reached the scene there were 2 ambulances, 2 fire engines, 3 Gendarme vans and a huge crowd of people. She panicked. Eventually she found me in one of the ambulances and as she looked in and saw me with an oxygen mask on and wired up to a heart monitor, she nearly fainted.

The first Gendarme on the scene had already poked his nose into the ambulance and his first words were that I was travelling too fast! He then insisted on breathalysing me.

The paramedics were getting concerned about me and wanted to get me to hospital. I was asking them to wait for Lynne as she can't find her way out of the village let alone to a hospital 26 kms away in a town she had never been to! I lost the argument and off the ambulance went whilst Lynne was giving the gendarme all the details. (he not only breathalysed the other driver but Lynne as well!).

I thought I'd never see my wife ever again. I know some people may think this was a good idea but, at the time, I didn't.

We got to the hospital and I was examined within minutes. I was then left on oxygen whilst they attended to other patients and lo and behold Lynne arrives. She had followed the road signs to the town. Then she stopped someone and asked where the hospital was. As she could only remember the first part of the direction, 6 people later she arrived at the hospital. I was never so glad to see her.

I was then taken upstairs for x-rays which showed that I had 3 ribs on each side at the front broken and 3 of these were also fractured at the back, 2 on the right and one on the left.

They wanted to keep me in, I didn't want to stay there. After some heated discussion they agreed that if my heart/pulse rate stayed steady for the next hour I could go home. So we stayed there for an hour during which time the monitor alarm went off due to a flat battery. However all was well and after a while Lynne drove me very steadily home.

The police had a local garage remove the car from the scene but we didn't know where it was. A friend who speaks fluent French eventually tracked it down and had them bring it back to our house. 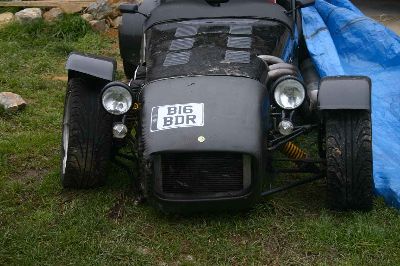 This is the front of the car. The wishbone bolts are ripped out of the chassis. The whole front end has been moved over. 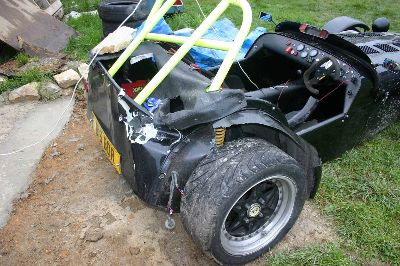 The rear doesn't look to good either. And that was my new wing fitted only a few months before 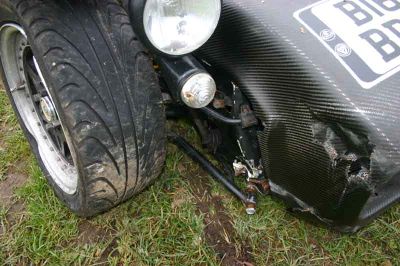 That lower wishbone bolt should be attached to the chassis. 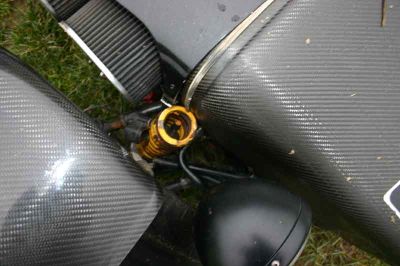 Ooops, where's the shocker top gone? Miracle seems to be that the front wing (also new a few months ago) is undamaged. (however after a closer inspection there is a tiny crack on the inside) 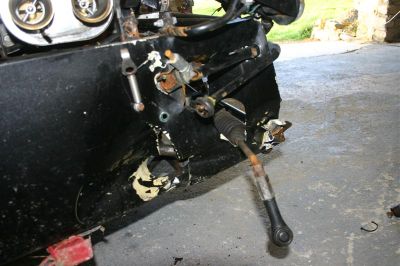 As you can see from the photos above the car has been outside. This was because the garage that bought it back couldn't back the car into my workshop due to their rear wheels spinning in the mud. As soon as I was fit enough I hooked the front up to the the rear of the tractor, raised the arm, and backed the car into the workshop. That bit was very easy. Then Lynne and I had to move the damaged car into place on a jack. Put it this way. I jacked the car up and Lynne pushed. What a gem she is.

22/01/07 I now await the French engineer to visit and report back to the UK insurer the extent of the damage.

On the 14th February 2007, I visited the Logi Marche at Reneze for some silver paint. This trip necessitated passing the accident site.

On the way back I stopped and took a photo of the view the third party would have had before turning left in front of me. 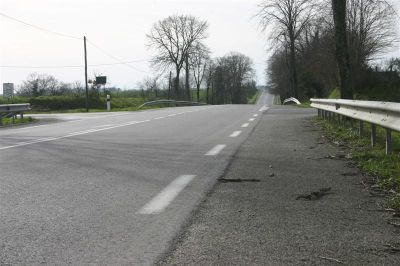 This is the view the third party had before turning left at the junction. 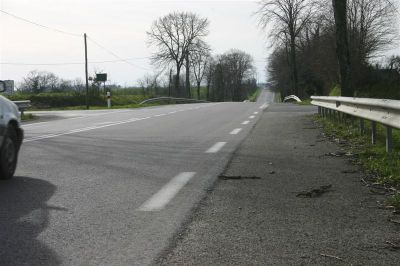 And this is 2 seconds later. The car just rising out of the dip can just be seen. A Seven would not be seen as soon, being a lot lower. The 3rd party seemed to be travelling at about 40 mph when I first saw it. I swerved, my car slowly spun and I hit the Armco on the right of the picture sliding sideways, facing the opposite way at not much less than 60 mph