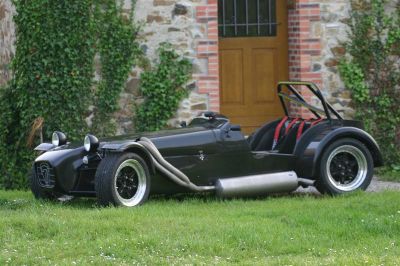 This Caterham 7 is well known amongst the longer standing members of the Lotus 7 Club. You can see the history of the car at: /101.html

In December 2006 the car was involved in an accident which meant it had a new chassis fitted in 2007. The car has done less than 1000 miles since then. This is a genuine sale which can be explained to any interested party.

It is a 1989 car (07/04/89) and is reputed to have been owned by Derek Bells son, Justin. I bought it in 1992 with just 3000 miles on the clock. Since then it has been heavily modified so that I can say there are only 4 original/unmodified parts left on the car, the steering coloumn, two rear radius arms and the De Dion tube. It is one of only two 100% carbon fibre bodied cars made with parts from Richard Lee (Richard in France or RiF). The car weighs 500 kgs when full of oil and water and half a tank of fuel.

100% carbon fibre body as made by Richard Lee (aka RiF to Lotus 7 Club members) It is fitted with an aeroscreen that really works. (hold your hand, palm forward by the side of your face whilst driving at 100 mph then raise your hand above your head-it gets pulled back by the wind but is OK by the side of your face). The seats are Kevlar units as supplied by Tillet. 4 point seat belts are fitted.

I asked Roger King if he could get 220 bhp from the 1700 cc Cosworth BDR engine. He thought about it then said he'd give it a go. He modified the head shape to that of the Cosworth DFV and fitted DFV valves and springs. A steel crank and rods topped off with Cosworth race pistons completed the job. Roger claims it will happily rev to 12,000 rpm but I've limited it to 7,000 rpm. The oil and filter have been changed every 3000 miles and the cambelt has been changed every 4000 miles. See Rogers work here: /900.html . A dry sump is fitted. The exhaust silencer was maed by "Metal Micky" and is Titanium. The radiator is a lightweigh aluminium rad. The exhaust manifold has been made to exit through the bonnet. This was done to enable the engine to be removed without having to undo the 16 manifold nuts, some of which can't be seen! I can get the engine out in less than an hour.

The gearbox has ultra close ratio gears as supplied by BGH. The gearbox casing is a lightweight Quafie casing. The ratios are:

BGH fitted a lower ratio crown wheel and pinion which is now 3.92:1

The front brakes have oversize discs which are drilled and vented. The front callipers are 4 pot Willwood units with ceramic pads. The rear brakes are two pot AP race callipers. I've recently fitted a pair of Willwood handbrake callipers with a central handbrake lever (it did have Sierra rear callipers which weighed a ton and an under dash handbrake which you couldn't reach if strapped in).

Wide track front suspension has been fitted and the car has AVO shock absorbers all round with a fully adjustable platform. The steering rack is a high ratio unit.

There are some spares that will come with the car but the important ones are 5 Revolution wheels shod with old (very old) tyres. There is also sevearl litres of Motul race oil. Other parts are just some bits and pieces left over from years of modifications.