On 10th April 2009 I purchased an MG Midget Mk III for Lynne. It has the 1275cc Mini Cooper A series engine. Here's some pictures

Just so we know what we're looking at.... 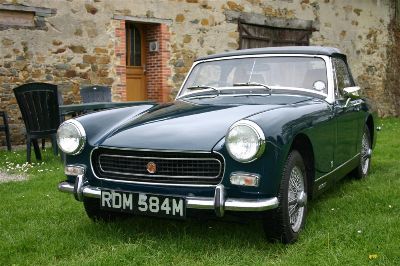 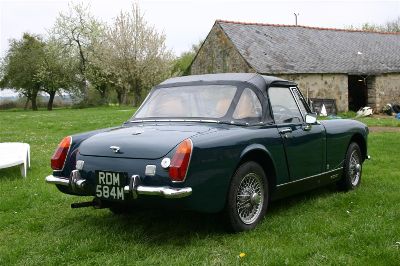 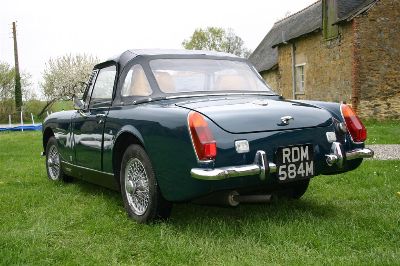 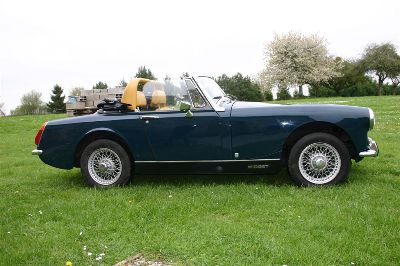 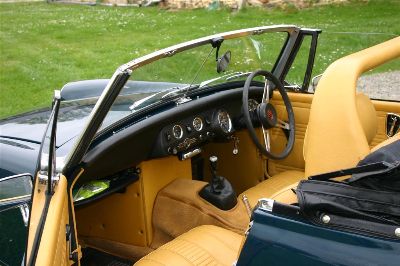 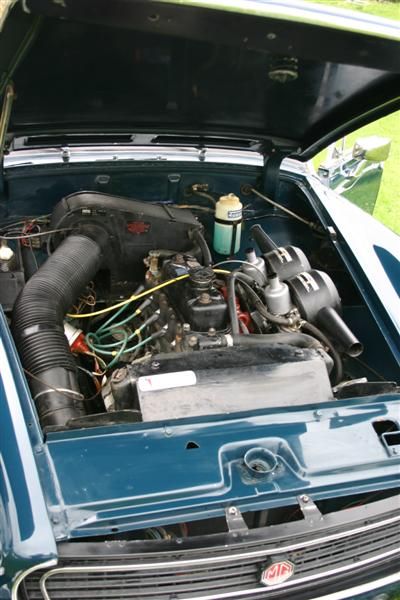 I bought the car from a home based dealer in Keynsham, near Bath. Lynne had dropped me off at St Malo in the morning and I got the ferry to Portsmouth where I was met by John Fletcher, a friend from the Lotus 7 Club. We had a pint or two and some fish and chips and I made my way to the train station to get the train to Bristol. Nice journey, it stopped at every station, even the one it wasn't supposed to stop at!

Arrived at Bristol Temple Meads (what a fantastic building - one of Kingdom Isambard Brunels finest) and asked 2 policemen the way to the hotel. They looked at each other as if I'd asked the way to Mars! Then decided it was the hotel they'd had a training session in and directed me accordingly. After a few miles walking I decided it I'd gone wrong somewhere. I got a taxi and asked for the hotel. It went all round the town and dropped of next to the station! To the right, not left as our boys in blue had directed me.

Next morning I get the train to Keynsham and am met by the dealer. I inspect the car, pay the balance and drive off with the top down in sunshine. Half way between Keynsham and Portsmouth it starts to rain. I was expecting it and knew it was supposed to rain for the rest of the day. Well it was a bank holiday! Roof up I carried on. No problems or dramas on the crossing and landed at Cherbourg at 19:45 (quarter to 8). It was raining. Made my way out of the dock and onto the road towards the A84 which would take me to Rennes.

By the time I got to the motorway it was raining extremely heavily. In fact it was torrential, whatever that means! I think it was one of the worst drives I've ever had. I was being blinded by everything behind me, and by most coming towards me. The car felt very "skittish". This was due, as I found out later, that the tyres were 20 years old and had only been driven a few thousand miles. As I approached Rennes the fuel gauge was reading 1/4 and I was going to exit the motorway at the next junction to fill up.

I locked the car and left the car on the hard shoulder with the sidelights on and started thumbing. It was getting close to midnight and the traffic was sparse to the say the least. After 10 minutes and no one stopping I started to step out into the carriageway. After a further 10 minutes or so a car stopped. The driver was an off duty Gendarme on his way for a weeks training at Vannes. He dropped me off at the petrol station just off the Rennes ring road. I bought a 10 litre can and filled it. I asked if I could get a taxi and was rudely told to wait in the road for one.

I crossed to other side of the dual carriageway and started looking for a taxi. The traffic was coming down in waves due to traffic lights further up the road. So I walked towards the ring road when there was no traffic. Except, of course for the taxi that went passed before I realised!

I got to the junction with the ring road and decide to hitch a lift. Standing under a street lamp with the petrol can in front of me was a good clue. After a few minutes a small white Peugeot with 2 lads screeched to a halt and reversed back to me. I climbed in the back and explained where my car was. We got there in about 10 minutes, I alighted on the northbound carriageway, thanked them profusely as they drove off to continue looking for some Saturday night fun.

I crossed to road under a flyover. Over the barrier into an area with planted bushes. The bushes were all dripping wet from the rain (which had stopped by now). I walked along the inside of the barrier looking for a way through the jungle. In the end I decide there was only one way for it - crash through the thinnest bit and hope I made it down the slope to the other carriageway.

Soaking wet I came to rest on the Armco of the southbound carriageway. I climbed over and walked down the hard shoulder towards the car a few hundred yards away.

Whilst filling the tank I looked up and realised that had I walked down the opposite side of the road to where the car was it was simple job to step over both sets of Armco without doing the Rambo impression! Oh well, we live and learn.

Uneventful drive home from there arriving about 2 am.

I have since removed the tank and "adjusted" the fuel gauge sender unit arm so that it's on "E" when empty (not 1/4).

I had 4 new tyres fitted and the car is much better and doesn't feel like your driving on 4 plastic blocks.

So, I removed the engine, replaced the entire clutch unit and the flexible pipe, serviced the engine and refitted it all. It now drives very nicely and is a pleasure to go out with the top down and just amble along in the sunshine.

The car was sold today (25th September 2014). It wasn't getting used and the money will come in handy for some stuff - like a telescope.

23 April 2015. When I sold the car I promised the new owner I would service it. It's been delayed due to my back but today I am doing it. Must be over 50 years since I serviced a Midget. I'm thoroughly enjoying myself. Isn't it funny how you (well I) do a better job when it's for someone else. The steering column has always had up and down movement and I've ignored it. It's got much worse and when I looked the shear pin has, well sheared so the two outer columns are sliding in and out. Shouldn't take long to fix it. In the morning I'll have to pop out to get a new oil filter as I can't find the one I had. I thought I'd put it in the boot but it isn't there. Then change the filter, refill with new oil and grease everything, job done, I know the brakes are OK as I did them before I sold the car.