Tom, a shedder of repute, wanted his new lightweight flywheel fitting. I volunteered to remove his engine and fit his new flywheel, so on Sunday the 14th November, several shedders descended on Bradfield. Here is a record of the day.

(For the uninitiated, the "sheds" is the test area on Blat Chat, the Lotus 7 Club forum, which has it's set of nutters posting nonsense) 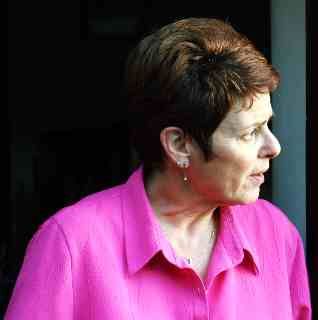 Now, where are those sheddy people? 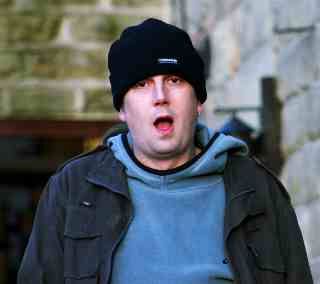 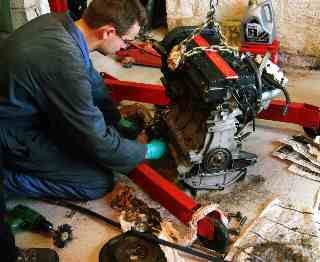 Whilst the rest off had a break we left the boy cleaning his engine. 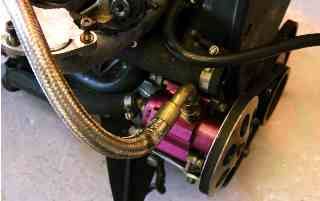 Who thought up this colour (for the dry sump oil pump) 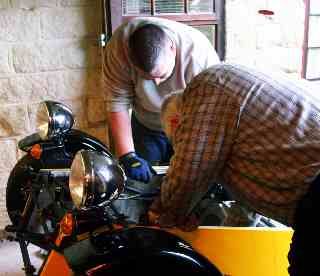 Err, what's this here then? 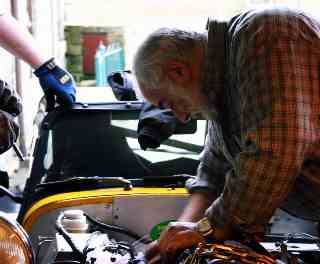 I think I fell asleep at this point! 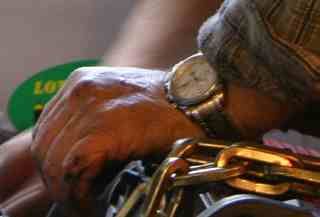 Close up of the watch. It's an Omega DeVille Co-axial chronometer. (that's a mouthful). It replaced a Speedmaster of 1976 vintage. I still have the Speedmaster and prefer it to this one but as Omega no longer can repair it properly it's best kept in a draw. 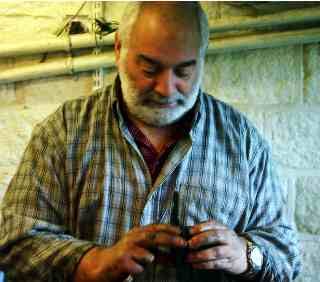 But I'm awake now and concentrating. "Now what do you do with this bit?" 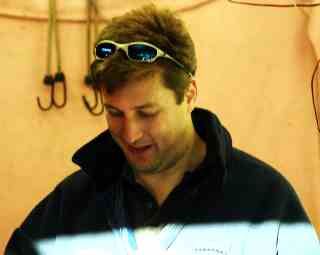 The hooks on the wall are for hanging the bonnet. But Tom's bonnet hasn't got an air cleaner cut out, so the bonnet went outside on the septic tank pump. Until the wind blew when it ended up on the floor. It was only a slight scratch. Sorry Tom, I should have realised that might happen.  However, the hooks can be used for hanging people who don't take their jackets off and roll their sleeves up! 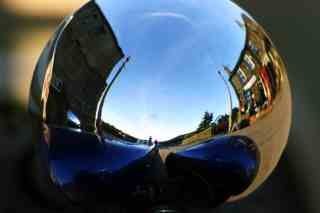 My grandson, Robert was in charge of the camera. This is Bradfield in a headlight. 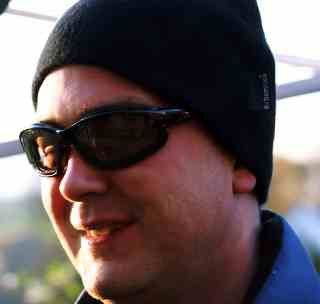 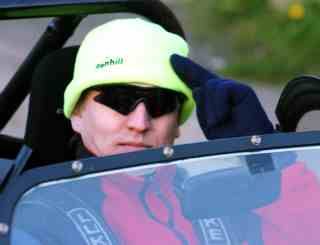 See what I mean. (Where did he get that 'at?)  This is the most strenuous thing he did all day. 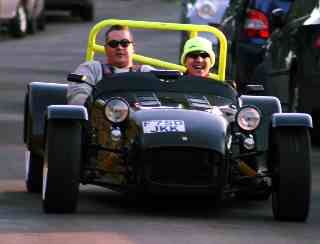 I'll have to get a hat that colour, co-ordinated hat & roll bar 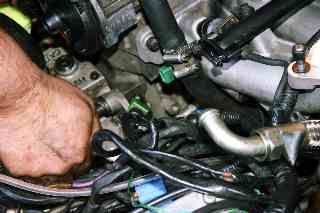 Right, back to the job in hand. HELP, what a mess!

Just for the record, this is NOT a shedder. It's my daughters partner, so I suppose he's the son-in-law. They popped round for an hour (as daughters do) and stayed the whole day. As son-in-laws do when there's engine coming out. 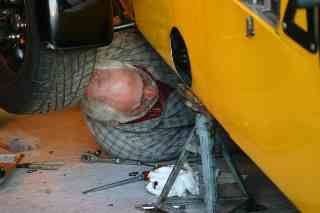 OK  guys, if you can just remove the axle stand. Or should I use a jack next time? 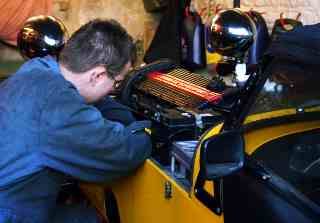 Tom was really good at taking off and putting back the exhaust manifold. Wish he'd put all the starter cables on before he refitted it though. 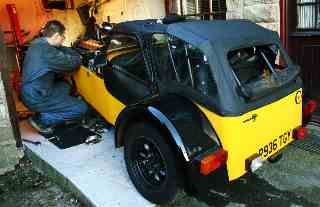 My son turned up in the evening and was really intrigued by the black flappy thing on top. he's never seen a behooded 7, and I've had the car 14 years! 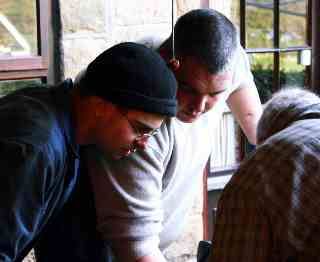 Three heads are better than one. I think we had just discovered where the engine's kept. 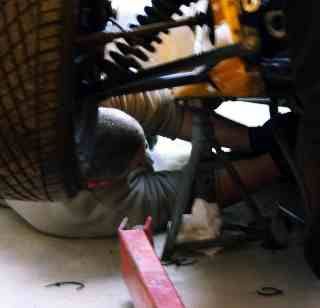 Hey, you, the engines up here 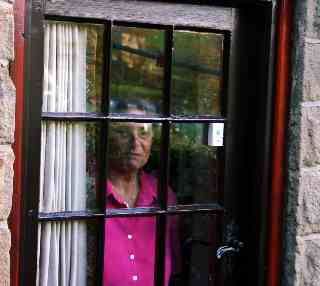 Hey guys, we're being spied on. Come on women, where's that tea? 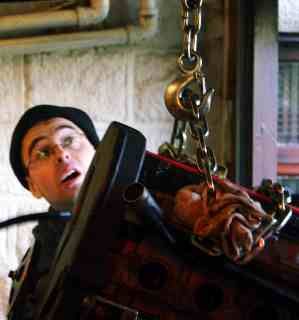 OH MY GOD! what happens if it falls 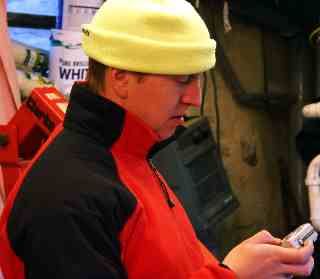 Good this, the top matches the crane and the hat matches my roll bar. Just for the record it's a camera in his hands. Which reminds me some bugger changed my radio from 4 to 1 - must have thought it was an exhaust! 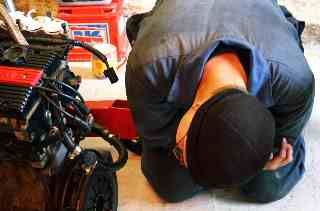 Not sure if Tom's trying to work out what it is or just praying? 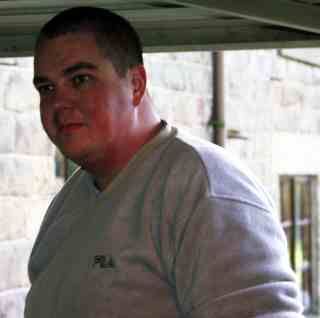 This handsome brute made my day. Thought my car was manic!

This is just a selection of nearly 60 pictures taken by Robert, my grandson. There are more, taken on at last two other cameras. These pictures don't show how crowded it got in my very small garage. 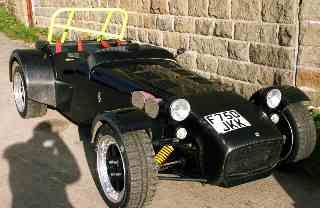 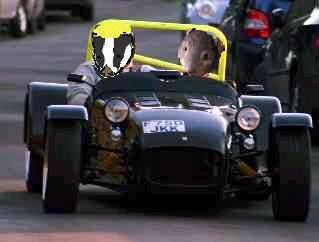 And badger & ratty came too.  No prizes for guessing which 2 sheddy people these are (look above) 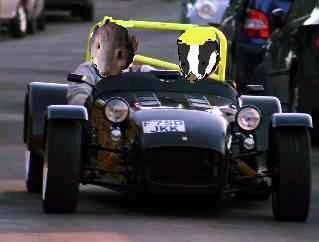 So, one lightened flywheel fitted, and everyone went home happy.