Weekend of 12th & 13th May:  Hugh Dent had organised a weekend at Pau-Arnos circuit as the French celebration for the 50th anniversary of the Lotus/Caterham 7. Caterham supported the event with some money and the presence of Simon Lambert and Carrie in the works CSR200.

I left home at 5am on the Saturday and got to the Bordeaux peage at 9:30. As I changed down the gear lever almost came out in my hand! I went through the peage and pulled over. Removal of the gaiter showed 2 screws had come out and the 3rd hanging on by a turn or two. I tightened as best possible and continued on my way. I then came up to Chris Wheeler (7 Workshop) with his crew cab Mitsubishi and enclosed trailer with a few sevens around him. They were going very slowly as I sped past. I slowed, went through the peage on the motorway marked Pau and Toulouse and then pulled in for fuel. I got back on the road expecting to catch them in 15-20 minutes. After 1/2 hour I realised I was on the motorway to Toulouse! I do like little detours.

Not to worry, it's the long way round but not too much further. I thought. I pulled in for fuel on the north side of Toulouse and looked at the map. Guessing I was about 60 miles from Pau and the time now was 11:45 I was OK to meet Dave and Nick for lunch at 1, as arranged.

I followed the signs for the airport and ended up in a small village. I stopped to look at the local map I had printed off the Pau-Arnos web site. The map didn't show the circuit! A man came out of the house I'd stopped by and gave me directions.  I hadn't filled up on the basis that if I'd stopped i would be late and this way, whilst I'd be very low, I would be on time. I had a gallon in a can in the boot. I drove round and round and round looking for the bloody circuit. Not a sign in sight. I ran out of fuel and dumped the can's contents into the tank. Eventually I found the unmarked entrance and drove in on a very broken up tarmac strip. I could see the circuit, I could see the pits but couldn't see how I got to them. I then then saw a small track and went down it only to come up to a closed gate. A young couple were sitting pit side under a tree and made a sign to go around. I left the circuit and drove round to the other side. 20 minutes later I turned around and came back. This time I went a bit further and saw the tarmaced area drop down over a ridge into the pits.

It was now 2pm and there wasn't a 7 to be seen. No one knew about Lotus Sept Club so decided I needed to eat and drove out to the auberge just outside the main gate. Inside were 2 French Seveners and the main man from the circuit. Everyone of our party had gone into Pau to check into the hotel.

Then Nick turned up. So we decided that everyone else should go back to the pits and I would wait there in case they returned from pau to the Auberge. In a few minutes, Nick rings me to tell me they are in the pits so I join them. Hugh is getting everyone organised for the blat. I've decided not to go as I've now only got 1st, 3rd and 5th gears and I'm tired.

I then ran out of petrol again.

Borrowing a full can from a French chap with an immaculate JPE I thanked him and said I would replace it in the morning intending to fill up on the way back to the circuit.

At 7pm he announces I must follow him now to replace his petrol as the stations will be closed in the morning. (The large station all have credit card machines so no real problem).

Everyone else is leaving for the Auberge for the evening meal. We shot off to find petrol. We drive into a local town called Artix and he turns left across the main road into a petrol station. And stops on the entrance! I'm left right across the road. So I back up and pull in beside him.

CRUNCH as I drive over the kerb I couldn't see because I was so close to him. I have a passenger, some French chap who wanted a drive in a carbon BDR and he says "oops". We then leave and find a supermarket. Whilst I'm filling up the passenger asks what all the oil is that's running out of my engine.

It's not too bad as the leak becomes a slow drip when the engine is running and the scavenge pump is sucking the sump dry.

We go back and have a really good meal, but I'm really mad and announce my car is for sale as I hate it!

Back to the hotel for midnight (19 and half hours after I awoke in the morning) and a hot shower and 6 hours sleep leave me feeling refreshed. Hugh, Simon (Lambert), Paul Marriot and I leave for the circuit. We get to the junction we need to turn left into and find 2 fire engines and several gendarmes turning a car on it's roof back onto it's wheels. Apparently there are 3 teenagers in it and they are drunk. The queue is getting longer but the main man turns up and we turn round and follow him to the circuit.

I spend the day applying plastic padding to my sump, trying to fix Dave's alternator (I failed, the regulator wires had disintegrated) and taking pictures of the cars going round the circuit. 340 pictures! There's a French chap there with a Series 2 Lotus which he's just finished a 4 year rebuild. It's very nice, not over restored, just right.

At 5pm the fab 4 leave for Bordeaux. Hugh leads us all the way by D roads and it's a very nice blat. We get to a swanky hotel in Cadillac and are joined by Chris Wheeler and his party. We get to Hugh's at midnight and crash.

Up at 7:30 and it's rained heavily overnight so the seats are full of water. Bailed out we set off, Paul and I going up the motorway, me to home and him to Bolougne. Simon & Hugh went off to look at a local track.

It rained. I got slightly wet 4 times but after I had parted company with Paul I went through some torrential rain and got soaked. I arrived home at 3:30pm and dried out.

Anyway, it's now 9:30pm on Wednesday 16th and I've spent the day welding the sump, fixing the gear lever (local Ford garage got the missing bit this morning) and fitting the new Speedo sensor which arrived last Saturday from SPA.. So here's the pics.... 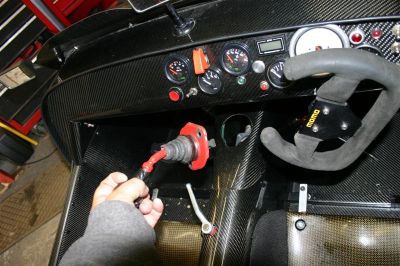 A gear lever that is supposed to be in that little hole. 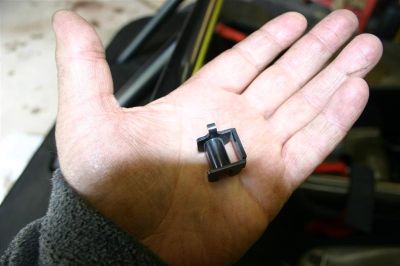 The little bit. All that agro driving around with 3 gears just because a little plastic bit breaks 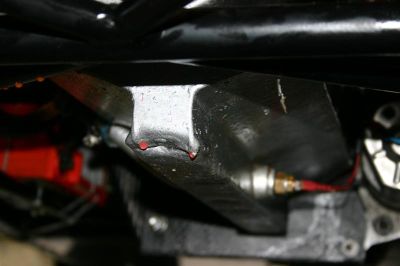 A brazed sump which was holed. I'm not sure why the 2 ends are red. I think it's just the colour of the braze. I hope!

Hugh is the chap in the bush hat. One of the worlds "Good Eggs"

Some of the 50 odd cars lined up on the Saturday morning.

A rare Series 2 which the French owners has spent several years rebuilding using as many original components as possible.

This is what real Lotus chassis plate looks like.

The JPE drivers girlfriend. Did I tell you that she came back from the petrol run with me. There are other things to look at beside cars.

Some of the participants on track.

Chris Wheeler of "The Seven Workshop". A real nutter, in the finest tradition of an English eccentric.