The Roof and Rockery

September 2013 and, at last, we start putting a new roof on the three sides of the house which haven't been renewed. We get Wayne a young English lad who is a roofer by trade and lives on the other side of the village to do the job. Actually, last February we asked our friend who has a roofer as a neighbour, to give us a price. He did ring up gabbling something in French which I didn't understand because he was speaking so fast, but we haven't seen him so when I found out that Wayne was a roofer I asked him. Within a week I got a detailed estimate and a proposed start date. He started a few days early and is getting on with it.

However, the first job we asked him to do was to fit a window in the back wall of the kitchen. This gives us a lot more light in the kitchen and we can now see the coming and goings of anyone who comes in to the farm.

The old roof has been stripped off along with the old battens. Wayne has put the new battens on and is just starting to fit the tiles.

Roof finished, Wayne is just fitting the flashing to the chimneys. He is also going to re-point both chimneys and fill in the holes on the gable end.

The whole picture, note the battens which have yet to be cut on the gable end side. Lynne thought they'd make good washing line. Until I asked how a short arse like her was going to reach!

This is the other side of the above. A bit more difficult as it has the dormer window which was originally a hay loft door.

The 3rd side to be replaced. Note the new window in the back wall of the kitchen. The pink string stuff is Lynne's idea to stop the flies getting in. I said it wouldn't stop them. But a women always knows best. Four of these cost £24 from Ebay (UK) the postage was £6.50. But that was each so the buggers charged £26 for postage. We still have flies in the kitchen.

Over the past 6 weeks I've laid hundreds of terracotta tiles on the patio/terrace. I've laid them "rustic" fashion so they are not flat but best described as "higgeldy-piggledy" or rustic.

We have an area in front (just seen in the above photo) which was scraped down to the underlying tarmac and the covered in a thin layer of concrete when mixing concrete for the patio tiles. The rubble that came out of the 70 cm thick wall to fit the new kitchen window has been dumped on it and I've just started to build a rockery to cover it. We are researching what to plant in it. We do not want anything that grows tall. Lynne is taking advice from a friend in Bradfield who is a serious gerdener.

It's a start, just a few hours yesterday (16/09/13). I will crack on tomorrow and the following days when the weather is supposed to be better. Kindly note the flower pots all planted with something or other which cost quite a few pints.

More to follow as the roof and rockery progress.

Back to the roof. Wayne has now, almost, finished the other side. It's taken longer as it has a dormer roof to tile as well as the roof.

Wayne is pointing the chimney breast. Do you like his "lad", his better half Angela.

Nearly there. About half hour before I took this picture Angela was fitting the tiles half way up the roof.

After a week off fishing Wayne started laying the tiles on the roof to the left of the one they are working on above. He had already stripped it and fitted new battens and new end joists.

In the meantime, I've not been idle. I've rendered the block work of the porch and then painted it. With some help from Edwin, a young lad that Wayne uses for labouring, we (well he) laid the rockery and dumped the rubble in the pond (can't be seen). Then we had a big clear up so the front of the house no longer looks like Steptoes yard.

The garden table and chairs are covered for the winter. The muddy bit at the bottom of the picture will seed with grass over the winter. We will plant the rockery with flowers next spring.

The sharp eyed will notice the porch needs barge boards which Wayne will be fitting when he's fitted finished the roof.

15th September and Wayne, as promised, starts putting the new roof on the gites. We've had weeks of fine weather up to now but it's predicted to have thunderstorms everyday for the next 10 days. It was OK until the morning of the 18th (today) and then at 0700 we had a spectacular thunderstorm for about half hour. It went from the south to the north right over the house.

So here's the progress. 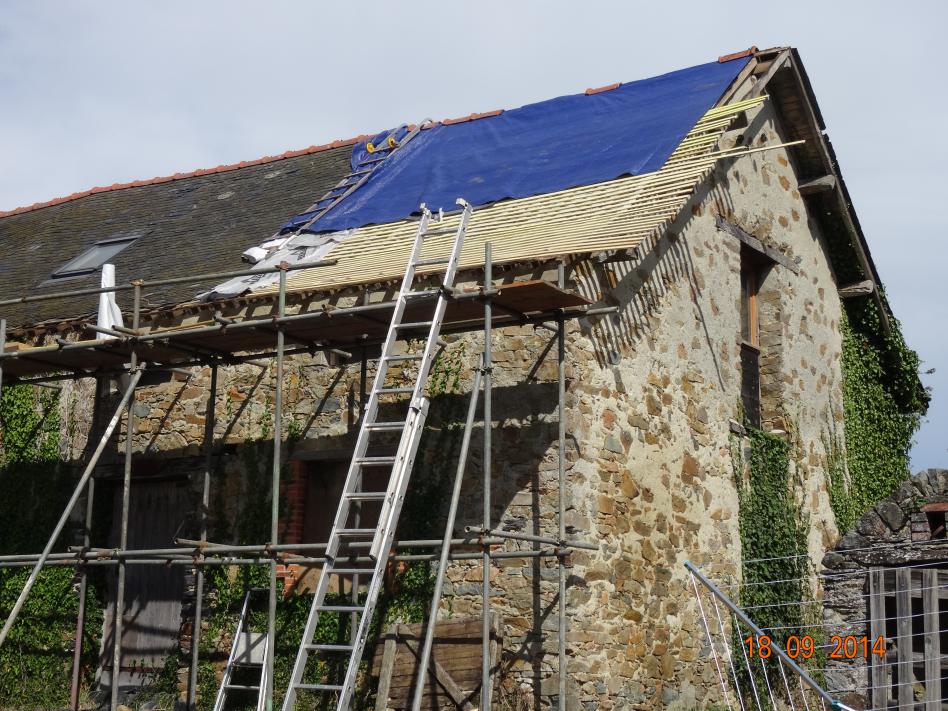 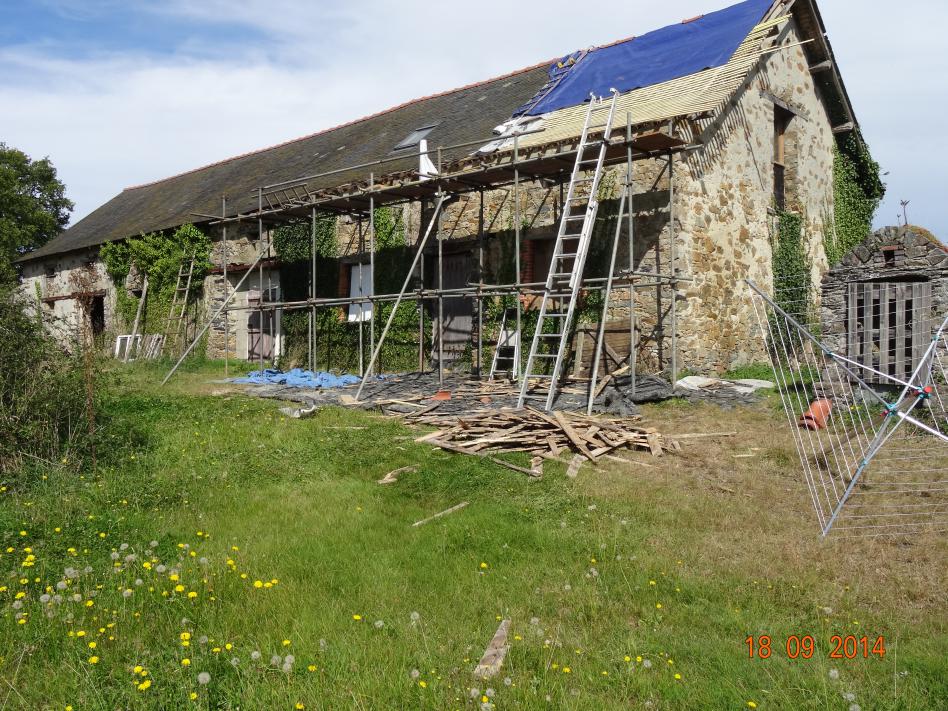 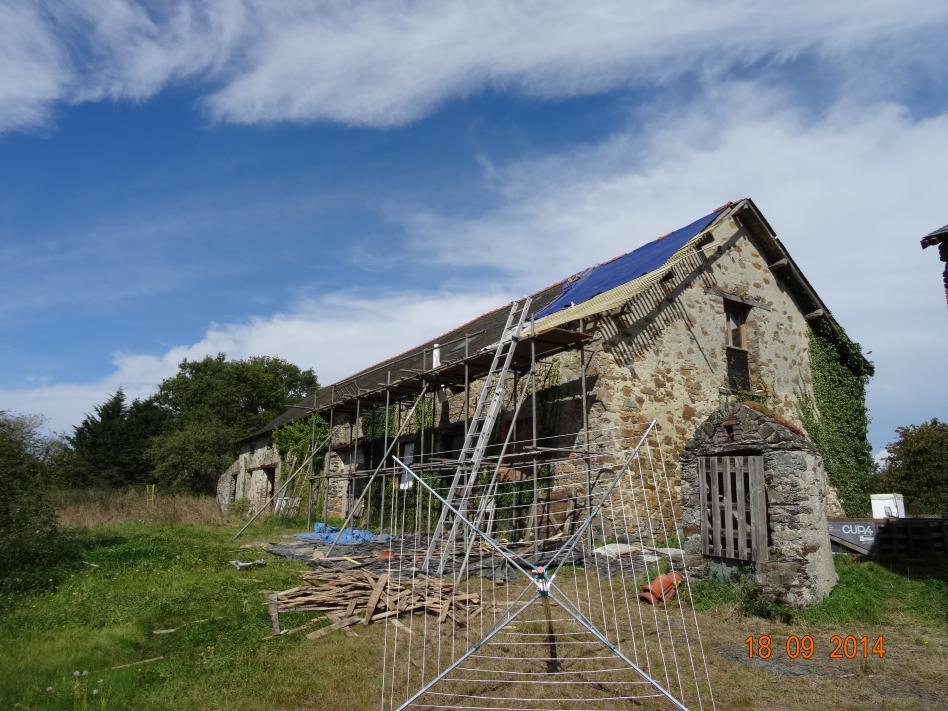 Please excuse the broken washing line. It needs a new lump of concrete - another job for Wayne.... 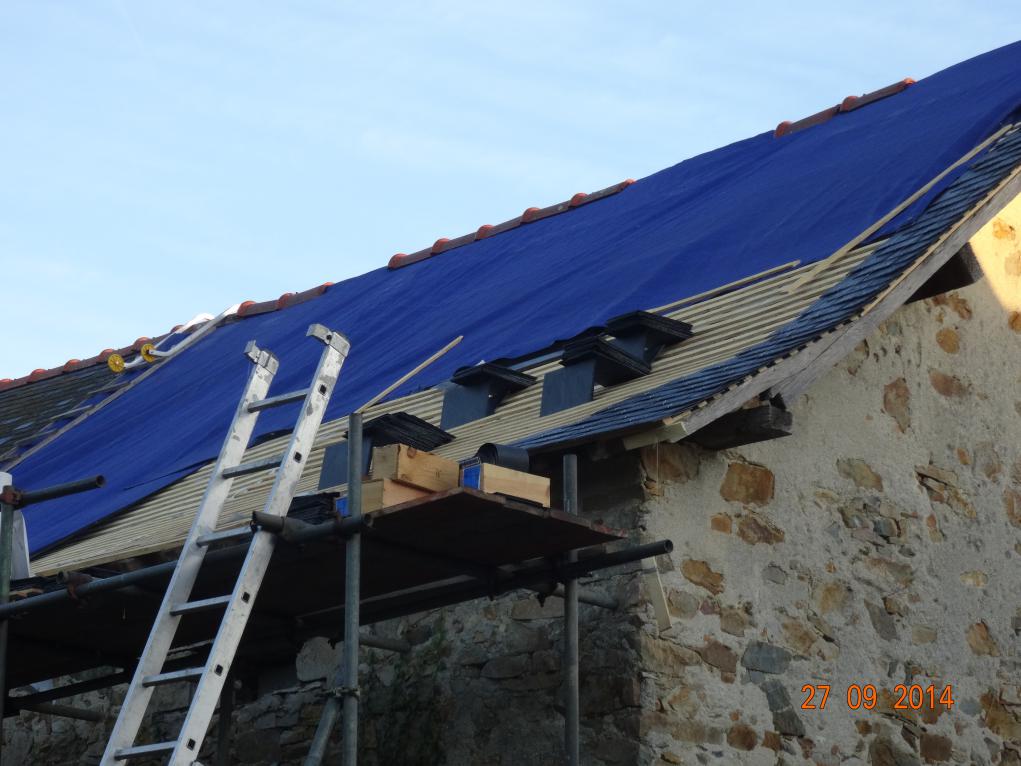 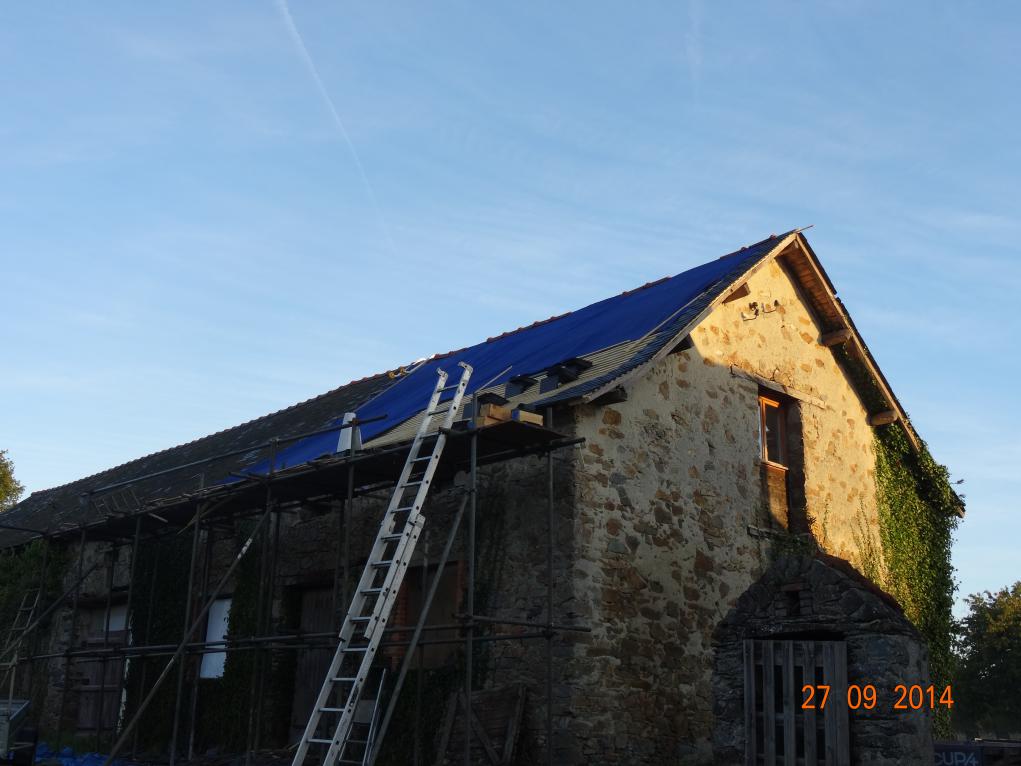 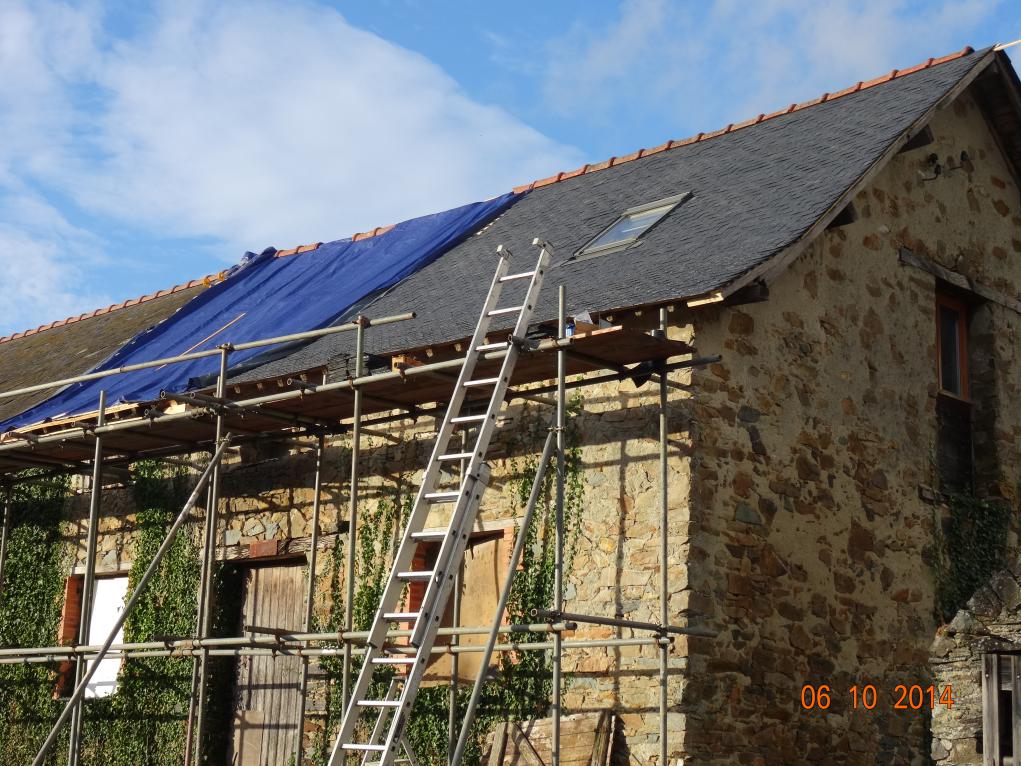 Nearly done. Not bad seeing as Wayne has been working on his own for most of the time.

When this side's done he has the other side to do.

The bathroom side now finished and the scaffold down. 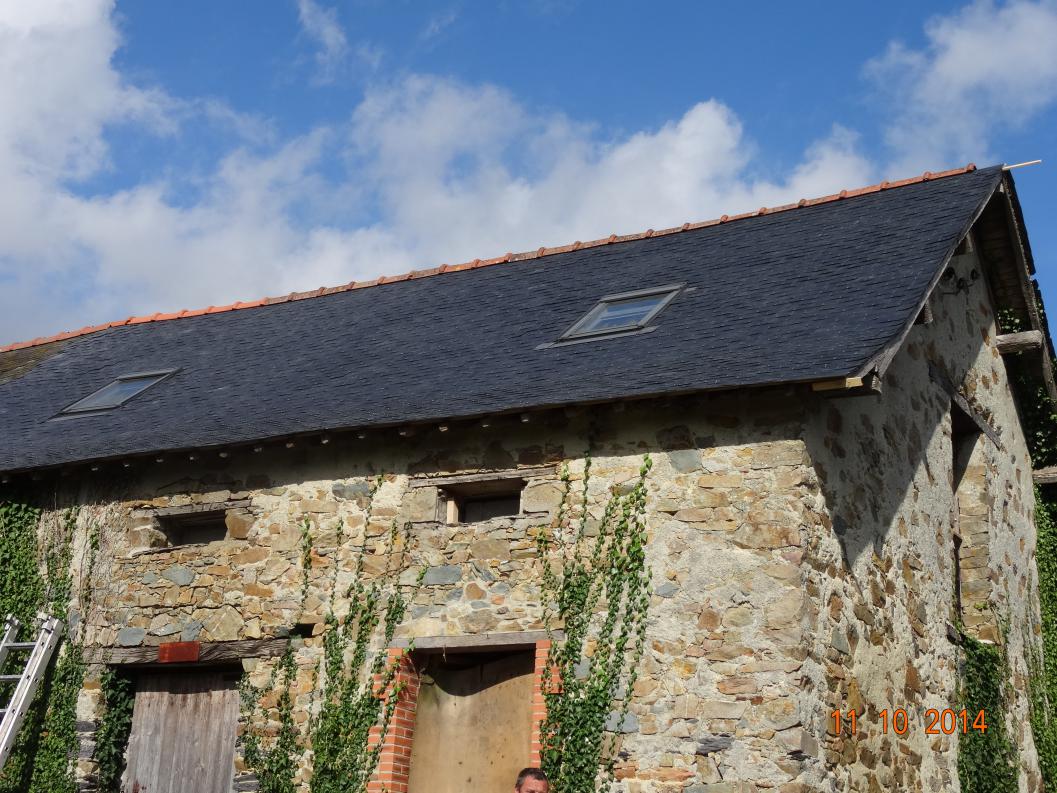 And the scaffold going up on the front. 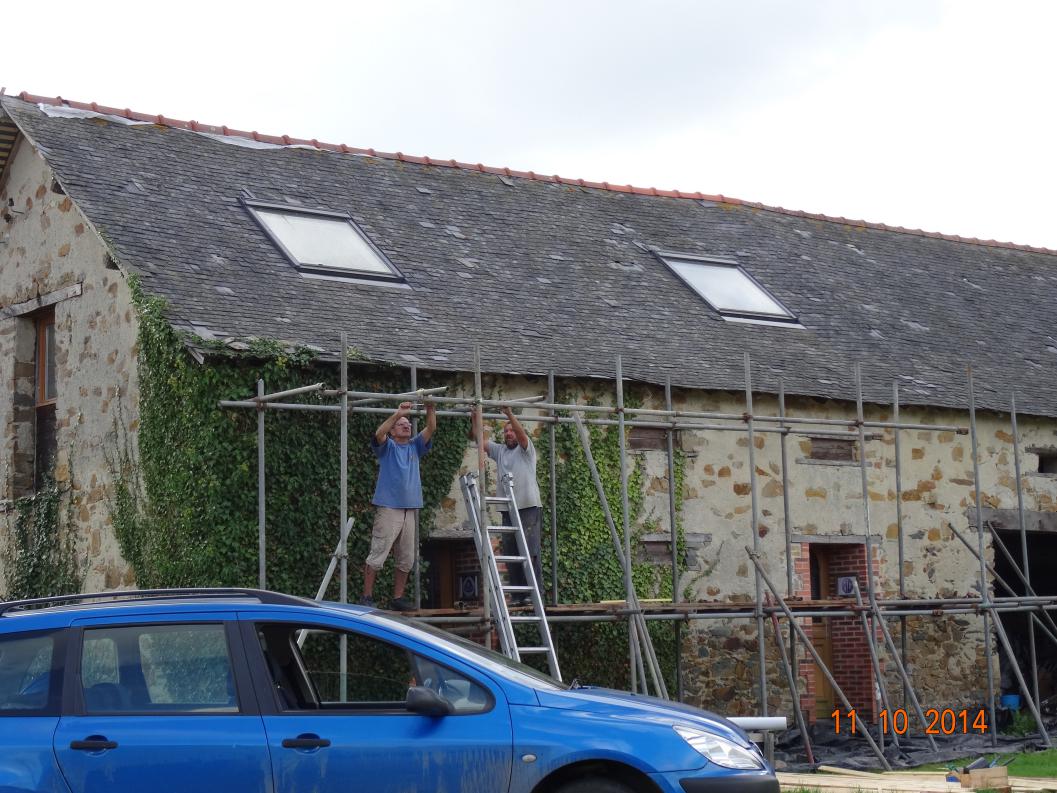 So, started on 15th September and we're now at 11th October. Not bad for one man and a few rainy days. 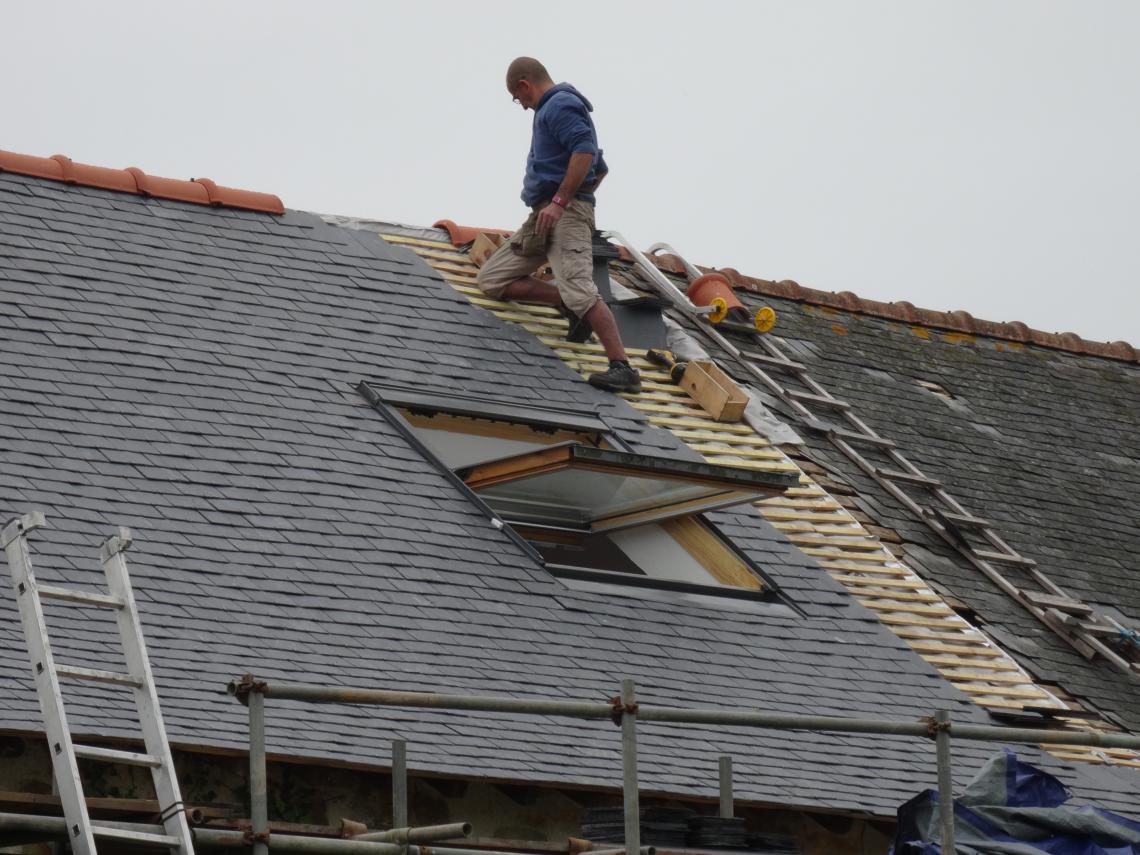 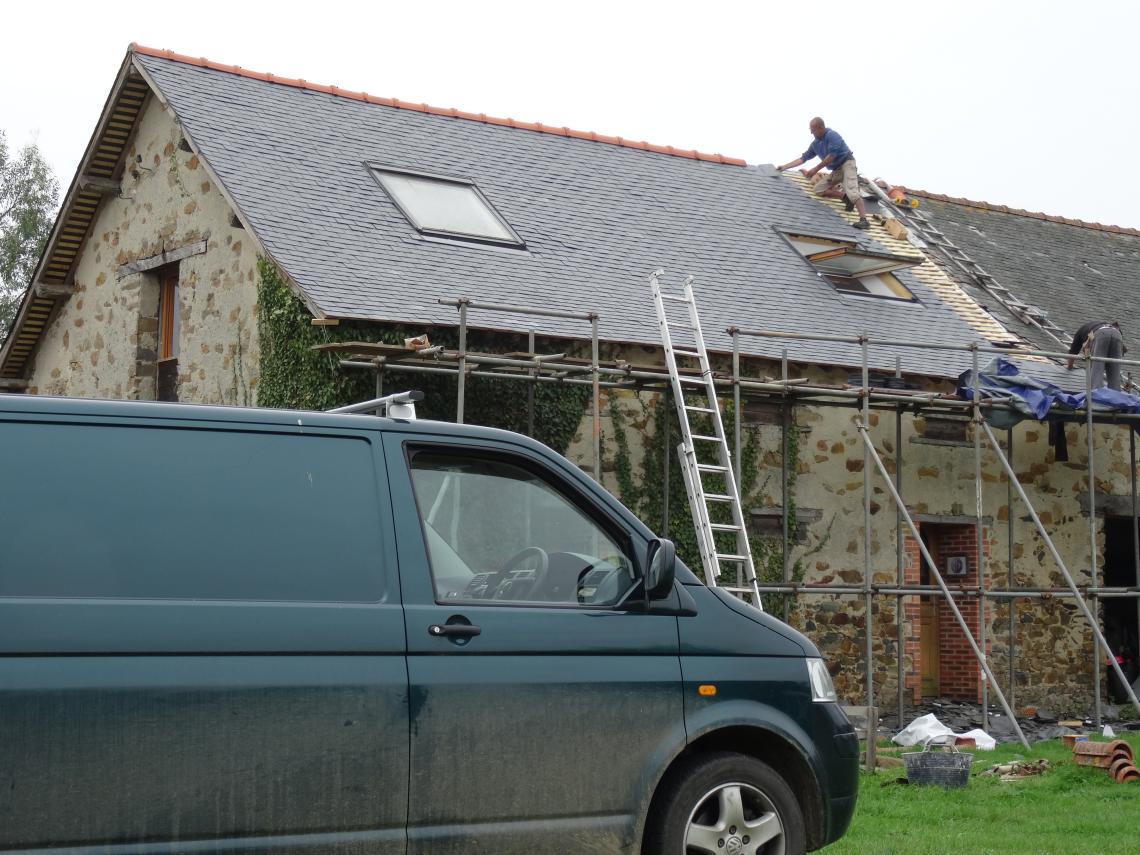 Last bit, should be finished by this evening (1st November 2014)