The following are some pictures and stories about our time at La Foie. 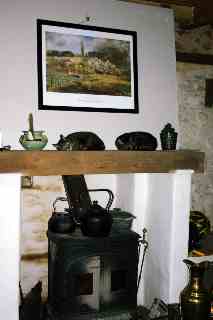 Two cats very content asleep above the wood burning stove in our lounge.

This is the loft after cleaning. One bin of Owls eaten food (mice, voles & shrews). 7 bins of dust and cobwebs. 6 bins of rubble and 1 bin of birds nests. We are boarding it to the eaves in order to leave as much timber exposed. This will be our bedroom and a 2nd lounge (with the hi-fi) at the end nearer the camera. The stairs will be in the room through the door. That room will be our bathroom with walk in wardrobe and dressing room. Update - 2009. This room never got finished as we decided to convert the barn (see "Barn Conversion") 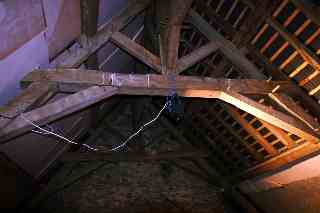 This is what I would have seen when lying in my bed. The roof on the right will have 3 Velux windows. I may even clean the Owl shit off the trusses. 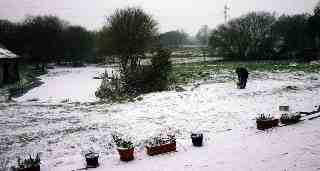 This picture was taken at 11:30 on 28th January 2006. 8 weeks after we moved here. The locals say it's the coldest winter in living memory!

This is the skating marks made by the Loire Bear, famous for its nocturnal ice skating. Sweep inspects the ice.

The duck lady. Lynne has only to go outside one hour before sunset, make a clucking noise and the whole flock of ducks come running to her, follow her, get a few handfuls of corn (more in the snowy/freezing weather), and go in the shed for the night. Louis follows along to make sure everything is OK. 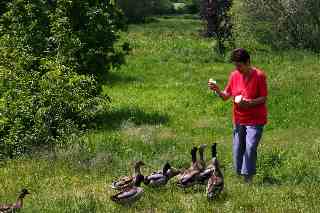 Feeding time at the Verona zoo. 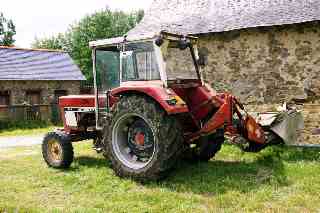 The tractor with grass cutting attachment. Note the mud on the rear wheel. We've had so much rain that the lower parts of the fields are so boggy that the tractor disappears up to it's axles. 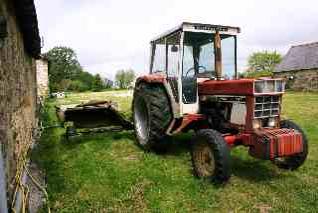 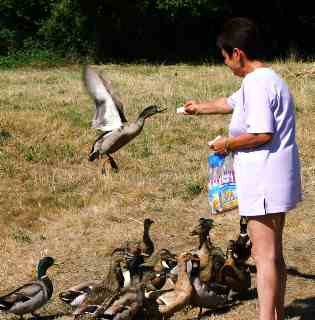 Tame duck or what. They will now take food from Lynne's fingers.

Little and Large. Lynne all of 5' 1" and a bit (the bits important she tells me) in front of the 9' Bull Rushes.

This is duck island. It's where Lynne buried me when I started the bulk buy for impact wrenches. Visitors to www.blatchat.com will understand 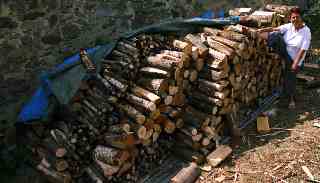 This years wood (Aug 2006) Took us 2 days to stack and Lynne's just showing she can still stretch it. It's 4 cords which is, I believe, 4 cubic metres.

The first summer we were at La Foie I spent clearing the undergrowth along the drive. These pictures show some of the work involved. Before I started you could drive along the drive and not see the fields either side! 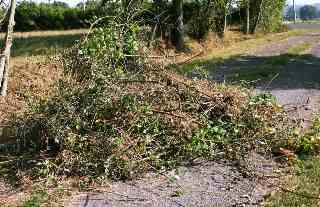 The pile of brambles it took 4 hours to extract from.... 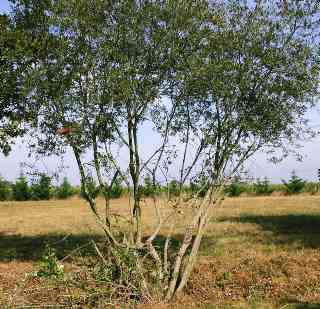 ..... this tree which was twice as thick before I started. 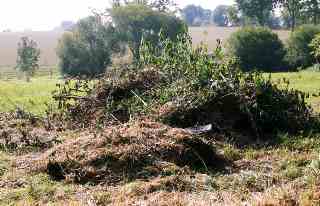 And this pile of brambles, undergrowth and branches was much higher, this picture taken a week after pile collected and it's settled from the 4ft height it was before being .......... 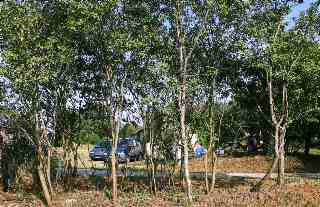 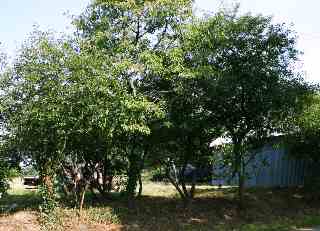 ... and here. Both these stretches of trees were so overgrown that you couldn't see through them.

So, a whole summer of clearing the undergrowth and Ivy from the trees. I also removed all the Ivy from the trees in the orchard and we now have a bumper crop of apples each year. I'll probably have to do it all over again next year!

In December 2006 I had a major accident and sustained 9 fractured ribs. The car wasn't too well either. You can read all about this if you go to click on the "Bit of Daft" tab above, and follow "Seven" and the Rebuild 2007 pages.

July 2007. I, and the car are now rebuilt. The weather has been very poor (but not as bad as the UK, we haven't had any floods yet).

The pond should be dry by now but is still full and covered in duck weed. The animals are really doing well in this weather.

We have 2 Moorhens who have had two clutches of chicks, the first of 6 and as soon as they were old enough to look after themselves they were tasked with looking after the second clutch of 4.

Moorhens. The first clutch of 6 have now fled the nest and we have the second 4. Expect these to leave in the next 10 days.

We have seen a Coypu in the pond and can report this to the Mayor and he will have his men come round to kill it. They are considered villains because they dig into the banks of lakes and rivers destroying the bank. However our pond is the water table rising above the lowest parts of the property and we're not concerned about a bit of bank erosion. At some time in the spring this Coypu was joined by a female and we now have 5 young Coypu's. It's getting very busy on our little pond. 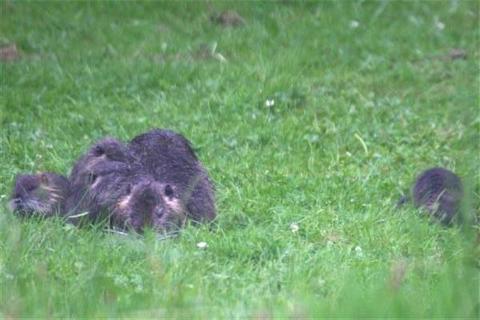 The teats are high on the side so that the young can suckle when they are in the water. These animals are vegetarian and very, very shy. The slightest movement has them scurrying back into the water and away into their burrow hidden in the undergrowth on the bank. Update -2009. They eventually got used to Lynne and I and just looked up when we came out of the house and then carried on grazing. However, in 2008 we had so many ducks the Coypu packed their bags and left. I suspect they're in one of the other ponds around the perimeter of the property. These are in the wood and not easy to get to so I'm not sure.

Today, after 19 months of waiting, a duckling hatched. There is a problem with the ducks due to one male with a broken wing who has become very aggressive. Some ducks seem to have left and we're down to about 12 or 13. They will not all go inside at night so we're not sure if the 3 or 4 missing ducks have left, on the other pond or have been killed by a fox. I have found no evidence of a kill so can only assume they are fed up with the fighting and are keeping away or have flown to pastures new. But we're really pleased to have the chick and are hoping for more in the next few days. There is a large (12 or so) clutch in a nest in the shed. This has happened before but they have not been incubated. Lets hope we get at least another 6.

.... 4 taken by predators and the other 4 were walked to death by the mother. She just walked all over the farm with the ducklings running behind her and they dropped dead with exhaustion.

So the next clutch were taken away on the day they hatched and we are rearing them in the bath. Others have hatched since these and the difference in size is amazing. The ones being hand reared are at least 3 times the size of those left with their mother.

June 2008 and two ducks have been nesting on about 20 eggs between them. They are not coming in the house they'll have to take their chances outside!

One duck has "adopted" most of the other ducks off spring so is looking after 14 whilst the other has 4. There was 20 but 2 seem to have perished. 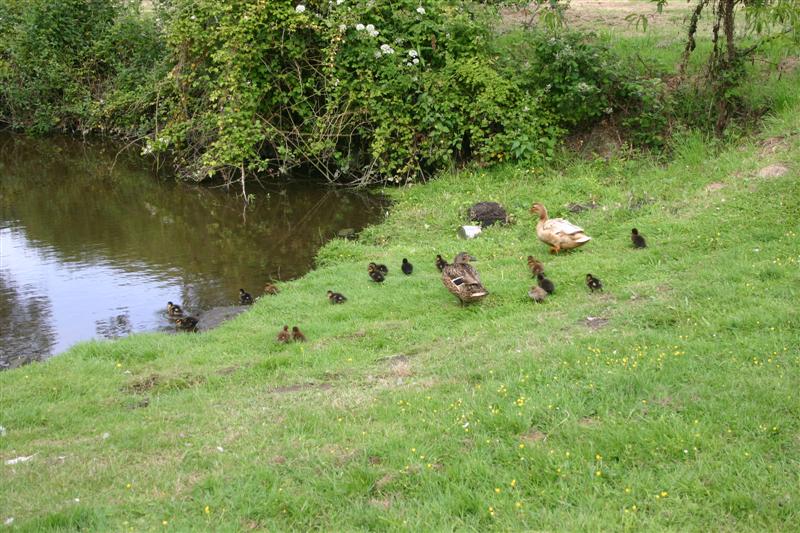 I think this lot may be OK. Problem is there are several other ducks missing so we may have a lot more before long. We found these two ducks with the ducklings and were watching them.

The duck population has now settled from the 50 odd in 2008 to 19 now (December 2009). We gave some away to a neighbours son who promised they were for pets not eating. We stopped feeding them corn and putting them away each night and we suspect some flew off to less crowded territory.

Life at la Foie during 2008/9 has been taken up with the barn conversion. This is recorded in the "barn Conversion" above.

This was the pond before the heavy rain in November 2009. Another few days without rain and it would have dried up completely. We would have had to get the ducks a paddling pool so they could wash their feathers had it dried up.