Let me introduce you to Henri Heron (pronounced Enry-Eron). We think he's a juvenile and is lost. He's around all the time and we have no idea what he's eating as our ponds do not have fish in them. 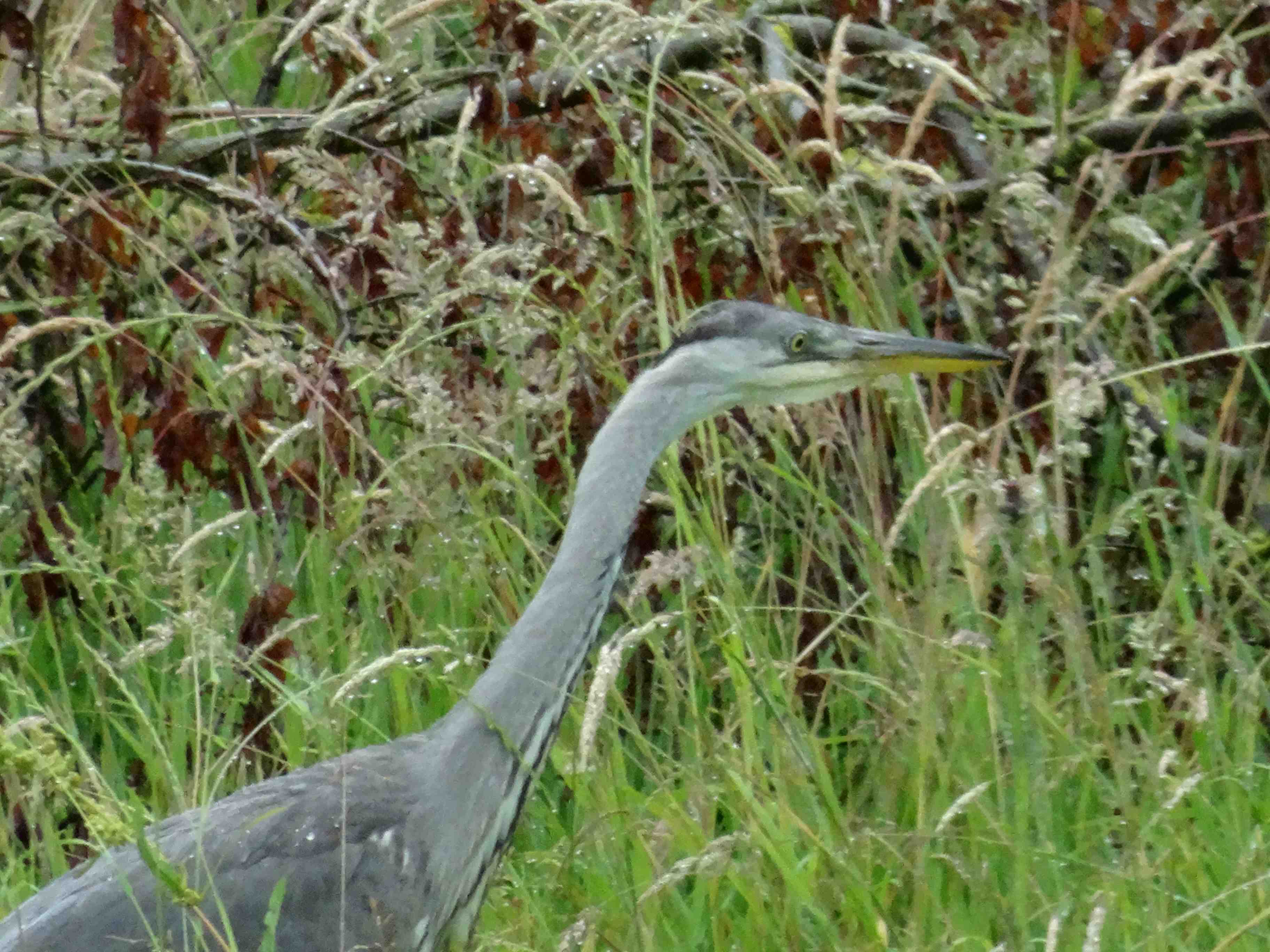 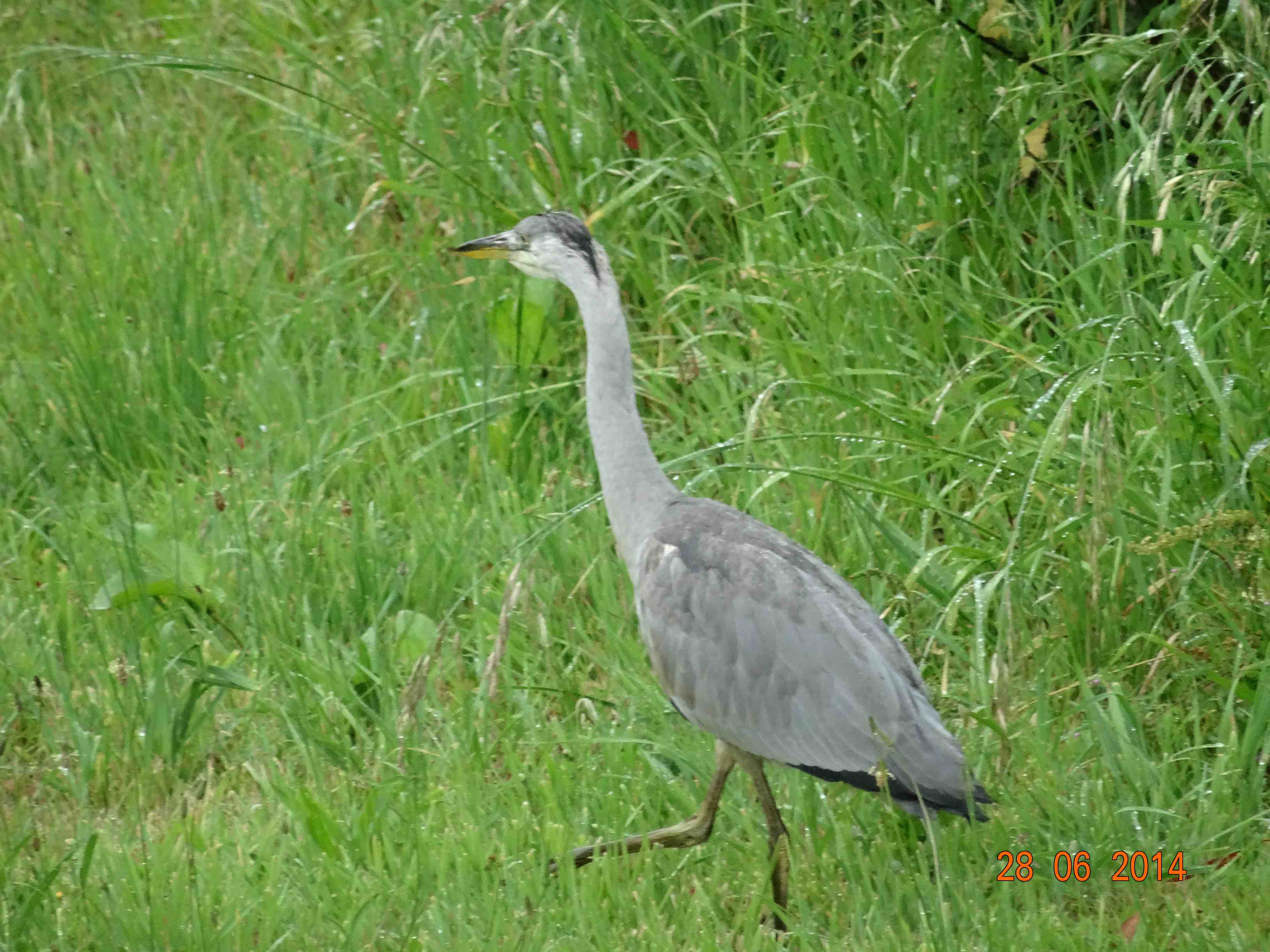 This is my wonderful wife cutting the grass in the drive. I can't do it at the moment as I have two compressed vertabrae. 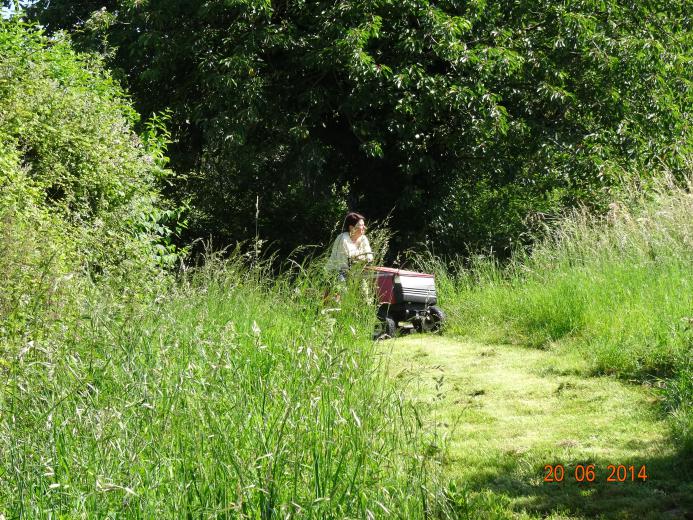 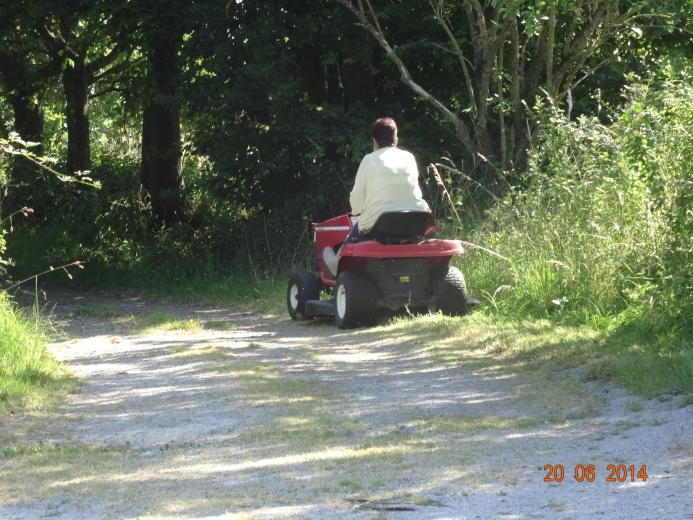 The chap who built the porch, Jacob, says this tree is diseased and need to be cut down. He wants to cut it down for firewood. What do you think, it looks fine to me. Surely it wouldn't flower if it was dying. 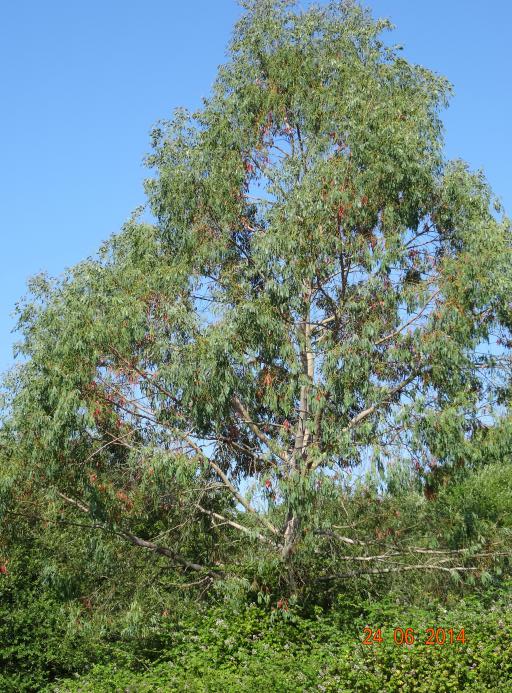 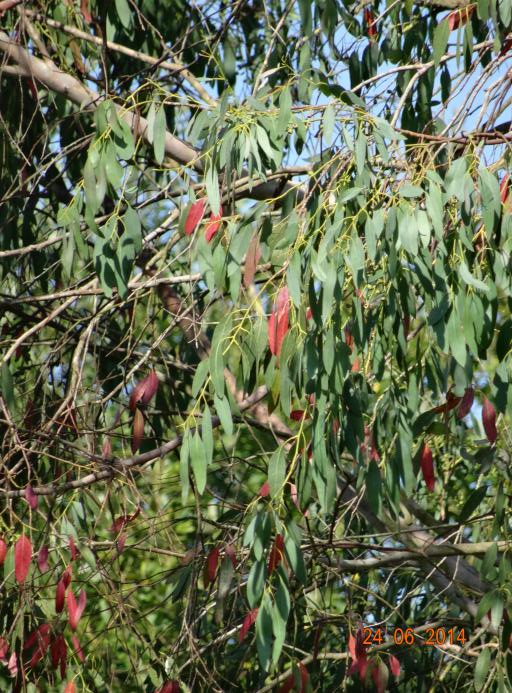 I started changing the clutch master cylinder on the 7 in April. Took 3 months for AP to make a new batch and then I had to get the distance correct as the new one is a different depth to the old one. Then I had to make new pipes as the threads are different. So here it is, at last. Only problem is there is a leak! I'll fix that when my back is better and I have finished spraying the car with clear lacquer. 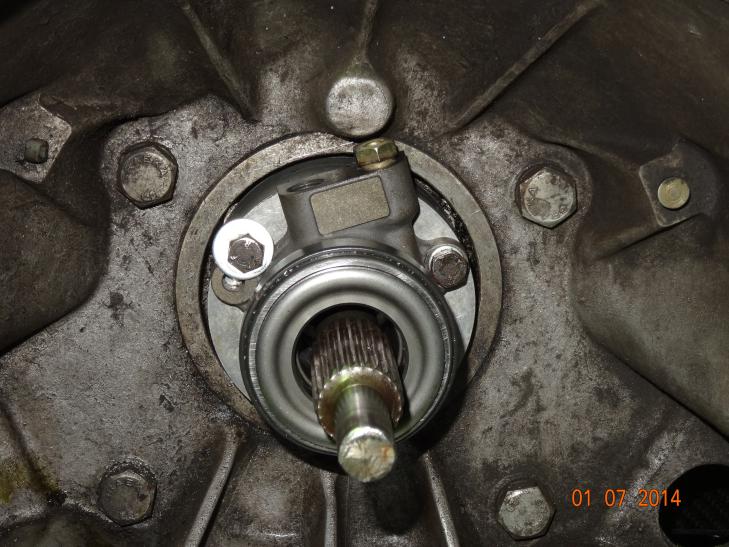 This is the new master cylinder. It is 13 mm bore and the old one was 19mm. So it should be 30% less heavy and have 30% more travel. If it has it should make the car far more drivable. 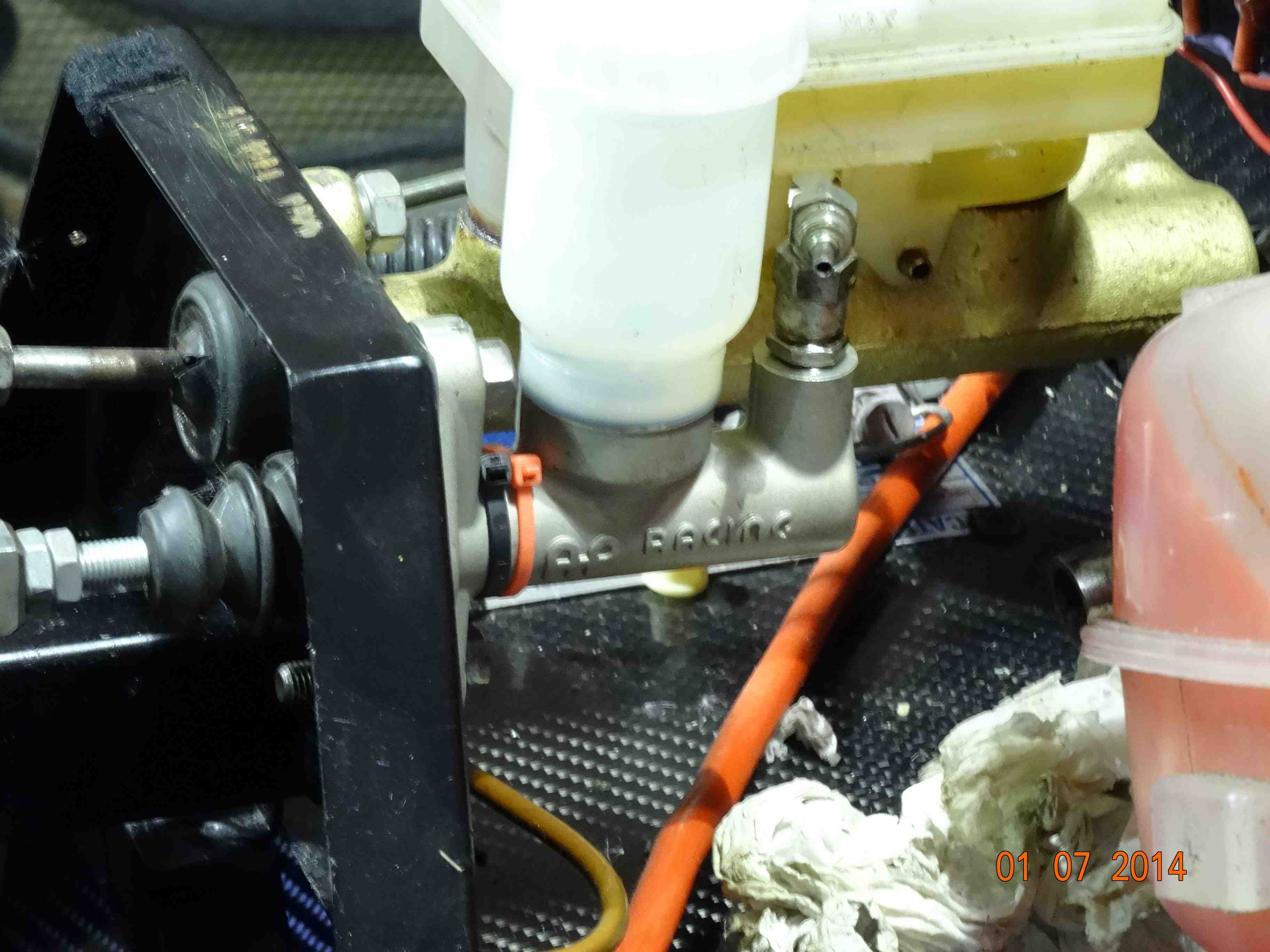 Finally, i got an air rifle when last in the UK. Not used it much yet but have tried it out on a tin flower pot:

On 13th July 2014 we went to the Bastille day race meeting at Sennone. Normally the race meeting at Sennone (a few miles from us) are amateur but this was a fully professional meeting with top jockeys riding the top horses. I couldn't watch as I was sat in a chair due to my back. So no photo's of the horses or the races. Lynne had a 2€ bet on each race. 9 races equals 18€. We spent 19€ on some wine and coffee during the afternoon, so 38€ in total. At the end of the day she had 30€ left so the day cost us 8€. She told me that as she put placed her 2€ bet for each race (ands collected her winning from the previous) the person in front was placing hundreds of Euros on a horse. Our friend explained that the meet attracted the heavy gamblers, which they don't see the rest of the year.

A few weeks ago I had a scan on my back. I'd left the CD with thousands of images of my spine/vertebrae with Camille (my friend and doctor). He gave them back to me at the meet (he is a member of the course committee, owns a horse and is the doctor in charge to attend to fallen jockeys, usually dislocated shoulders). So here is a picture of a good vertebrae and my broken one.

This is how a "normal" vertebrae should look. 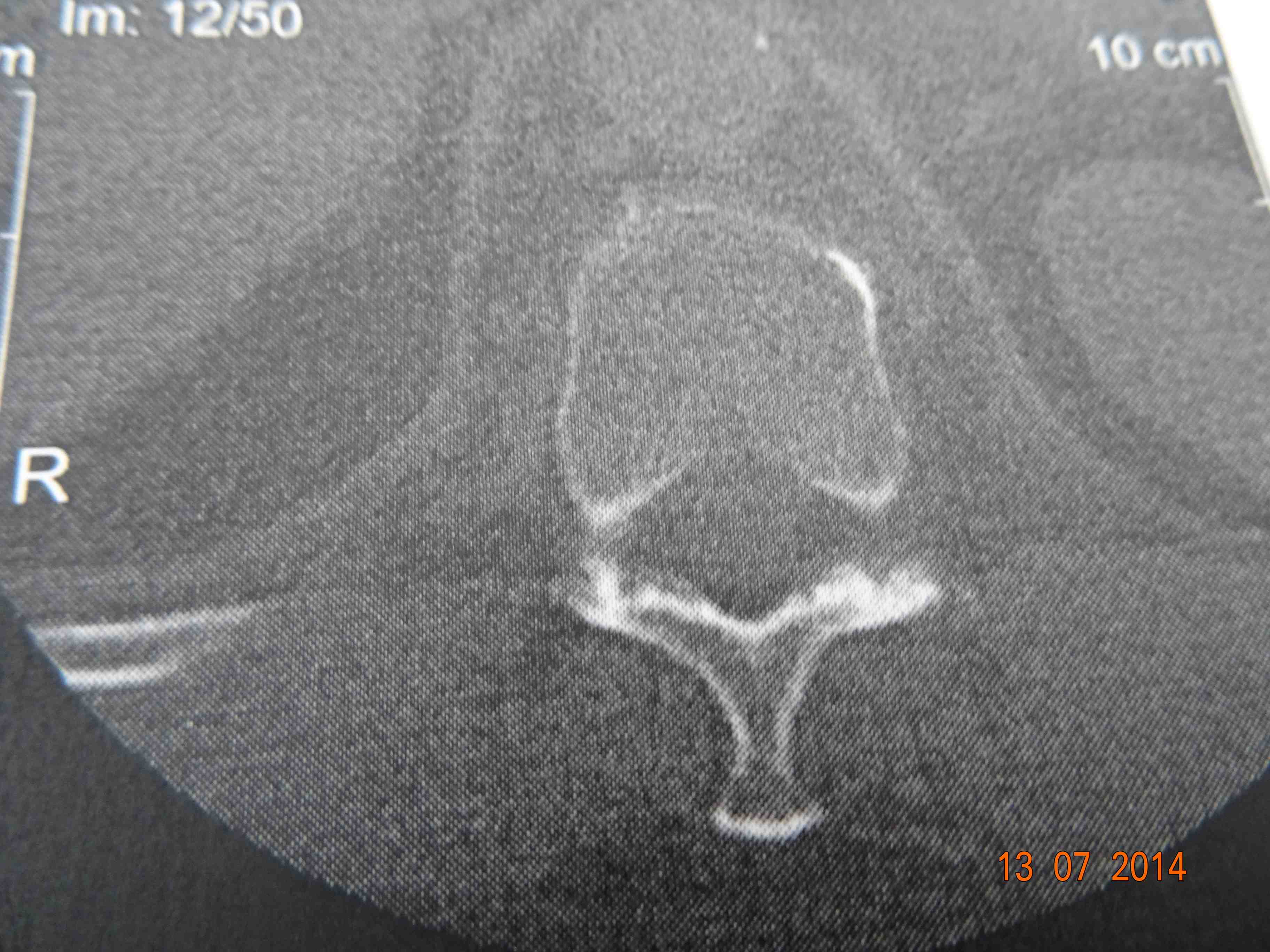 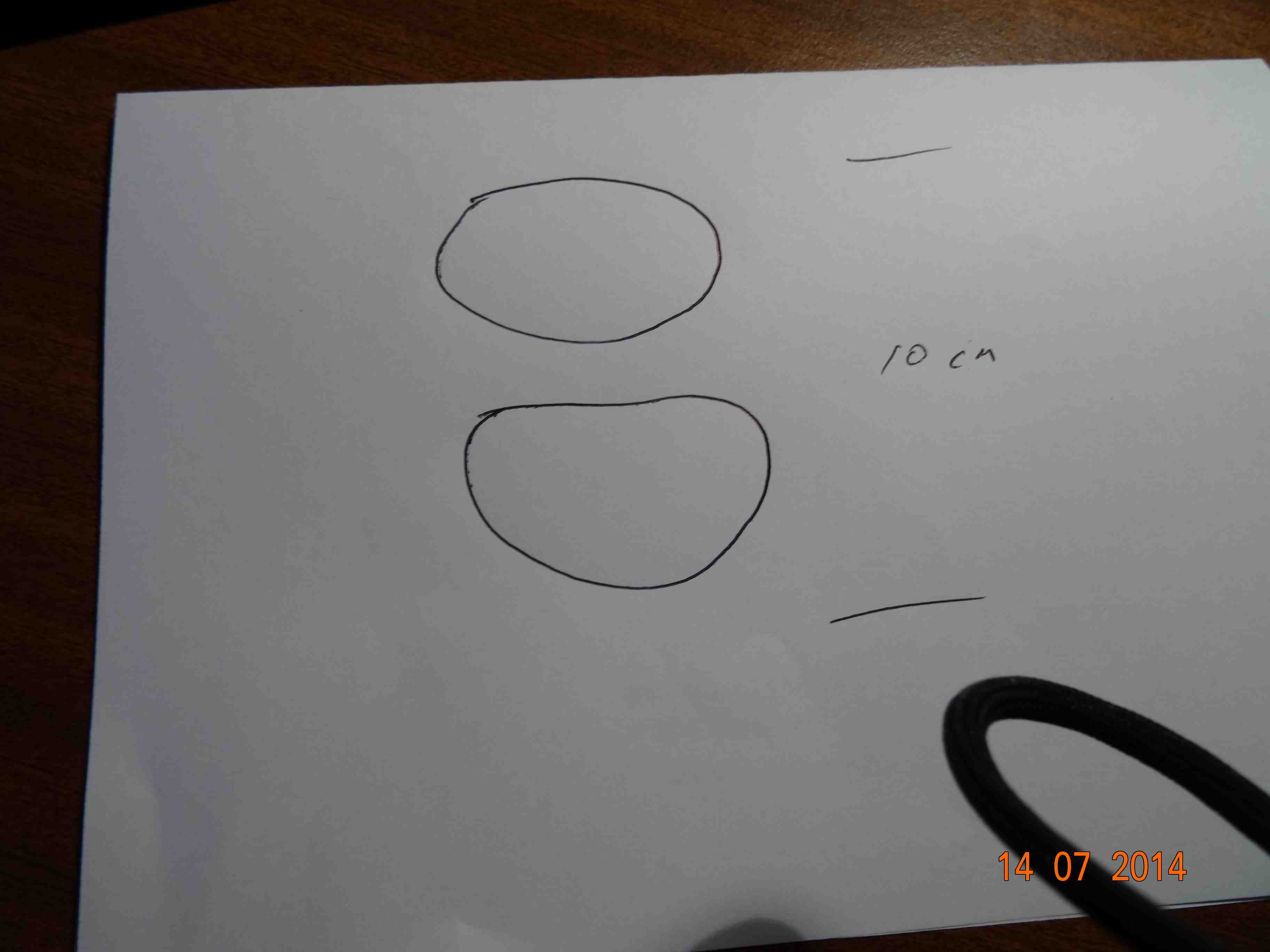 The paper print doesn't show all the pictures on the CD so I've drawn two that illustrate my vertebrae. 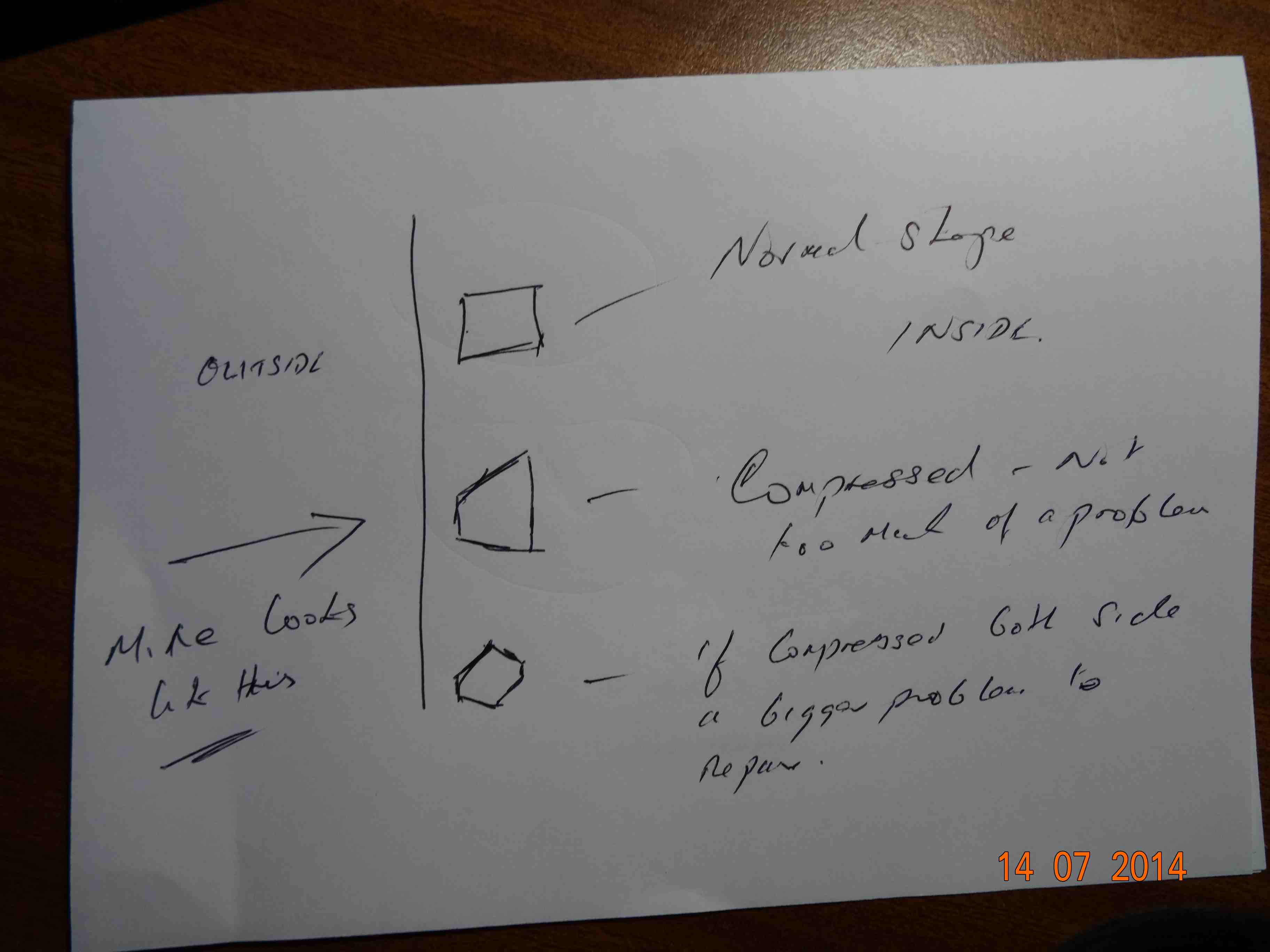 This is my fractured vertebrae. These images are photos of the paper printout that came with the CD. On the CD is an image of the other side (not sure if this is from top or bottom). From the other side it looks like 2 ovals separated by a clear gap. 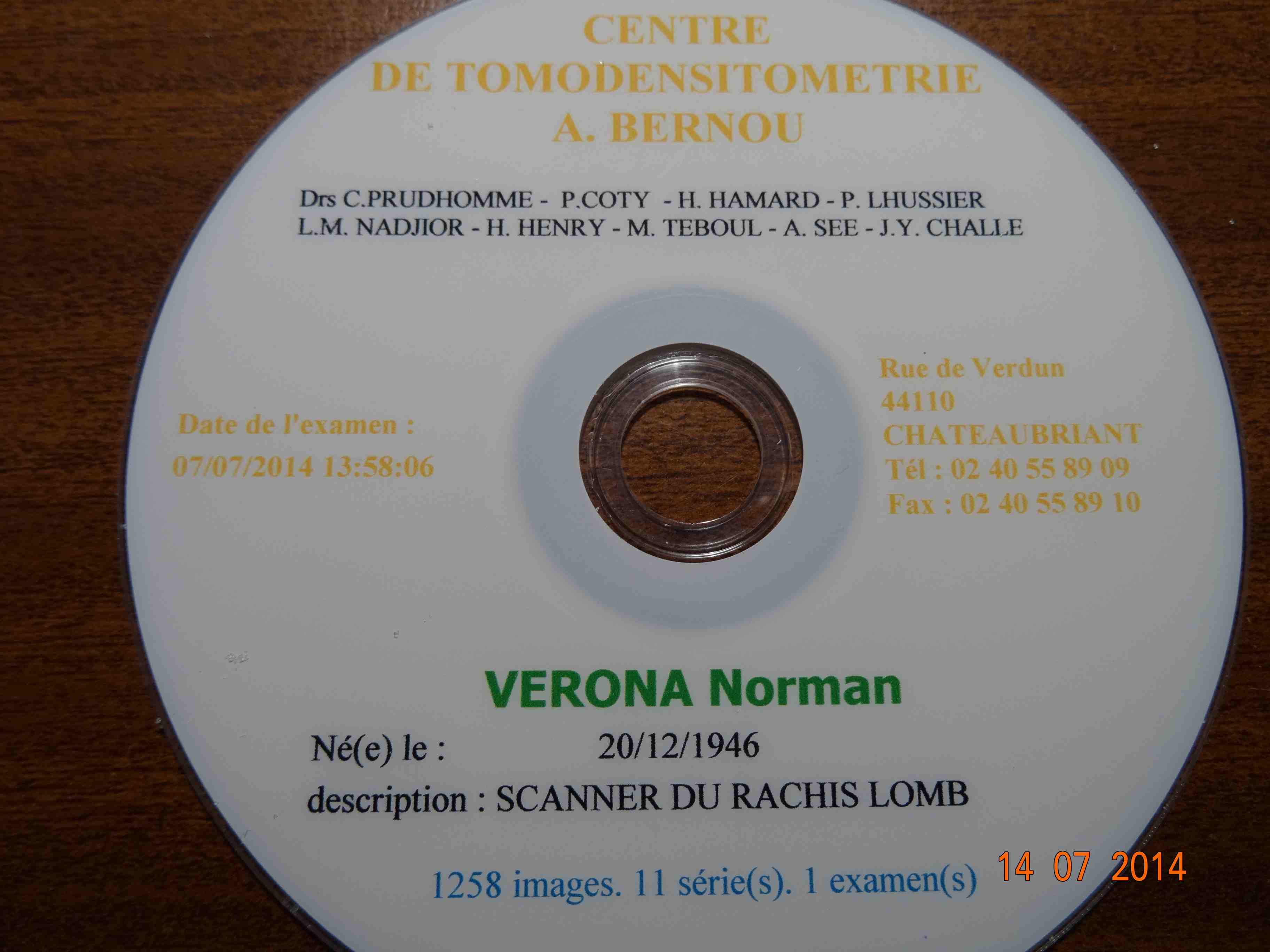 The CD, note how many images are on it.

Went to see a orthopedic surgeon on Tuesday  22nd July. He wants another scan on 22nd September, to not wear what I thought was a corset but is a brace and to wear a surgical corset. He will consider injecting cement in the vertebrae after he see the next scan. He wasn't very positive and says I must do nothing NOTHING!, no bending, no twisting, no walking, no lifting, no carrying, nothing.  I'll see my doctor and see what he says when the surgeon writes to him.

To say I'm pissed off is an understatement. I have 3 cars to sort out and can't do them. Lynne is making sure I do as I'm told, she loves doing that.

I've put the Midget up for sale as I rarely use it and the money will come in handy. I'm buying Lynne a telescope as she likes looking at stars (so I hit every day!). The Celestron 8 SE is favourite, looks good with an 8" lens and computer controlled.

Looks good doesn't it. The hand control sets where you are and then you enter what you want to see and it points at it. 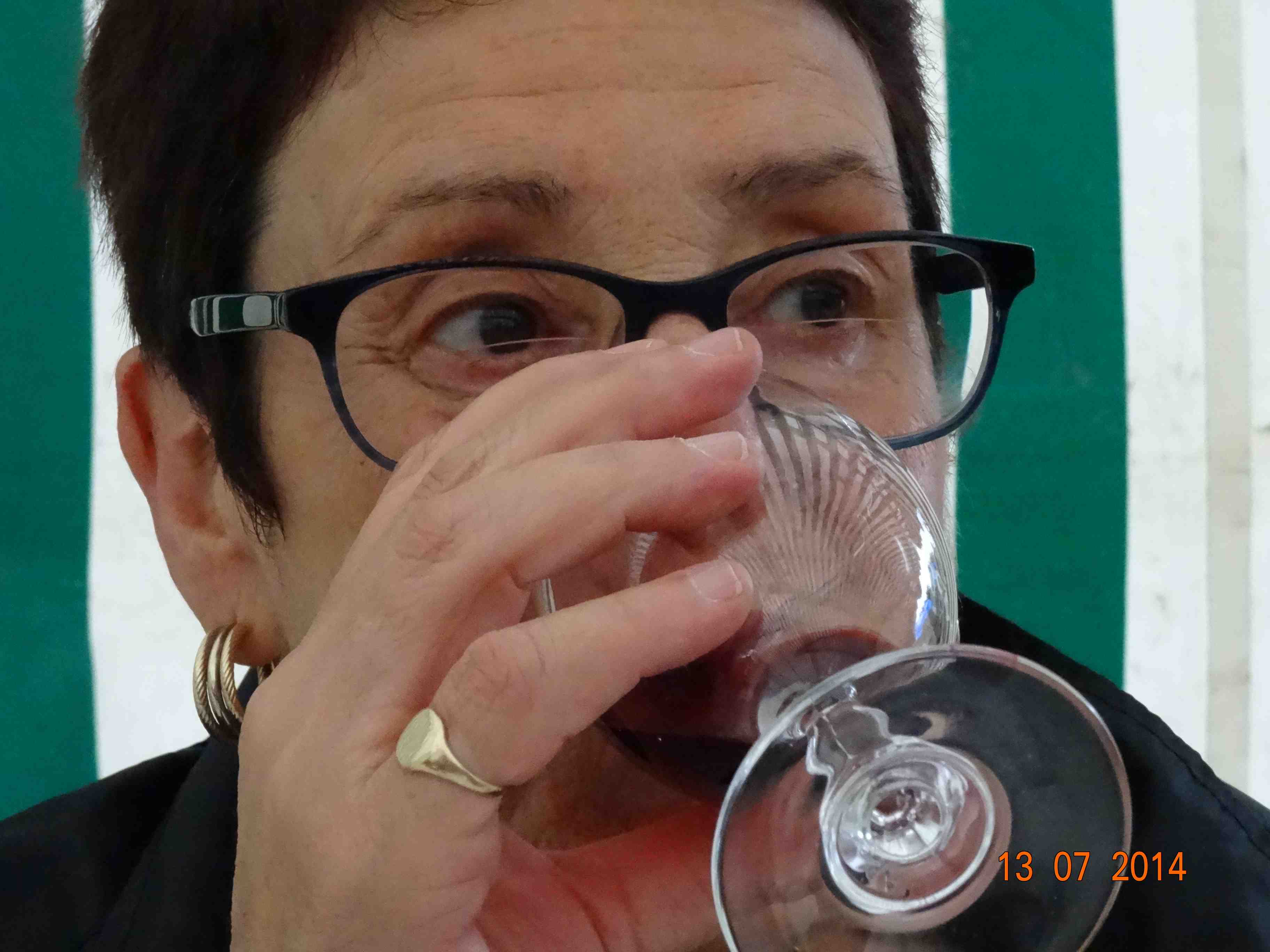 This is Lynne having a drink, 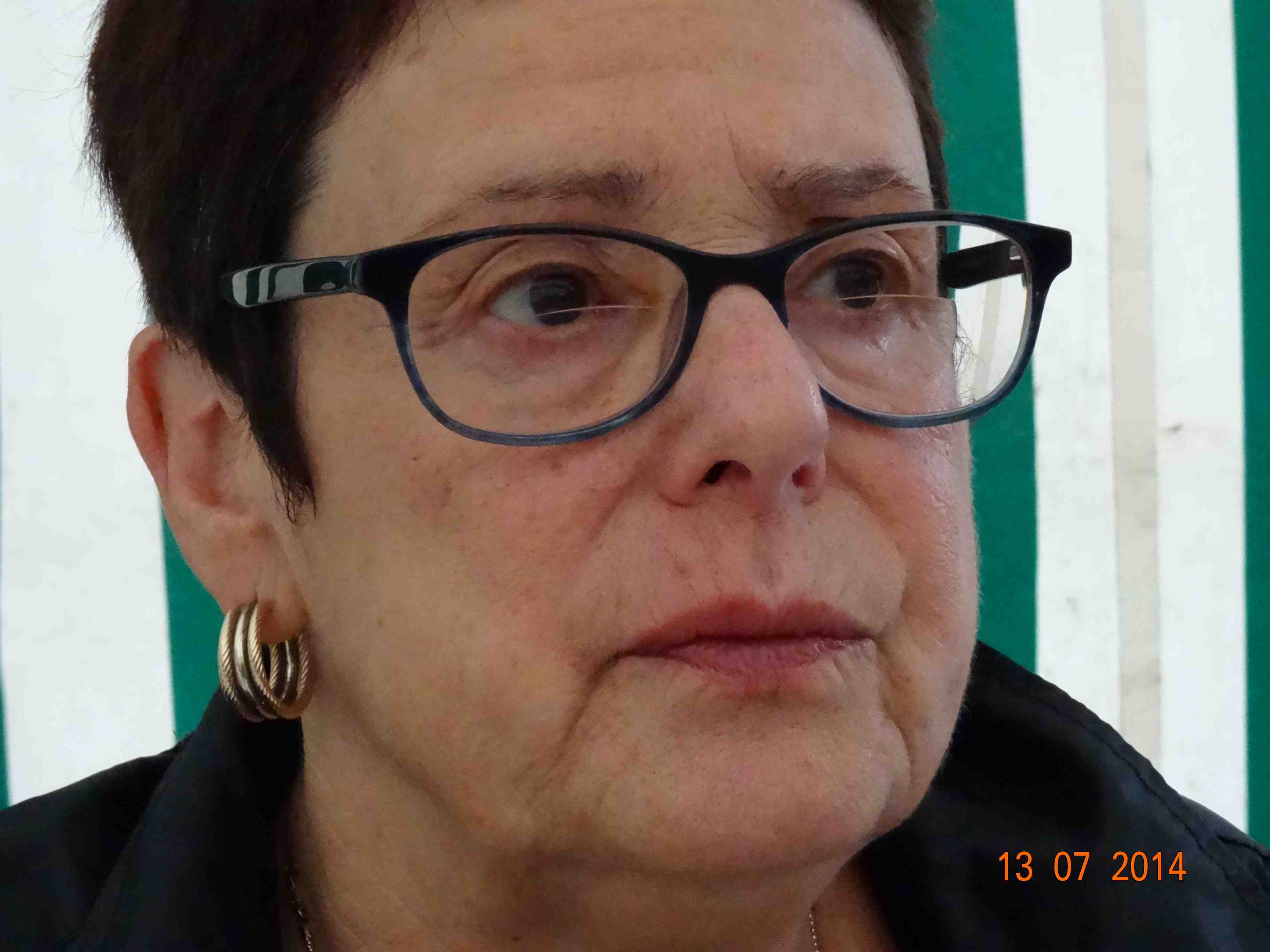 and this a picture of her not drinking. Lovely isn't she.. Well I think so. 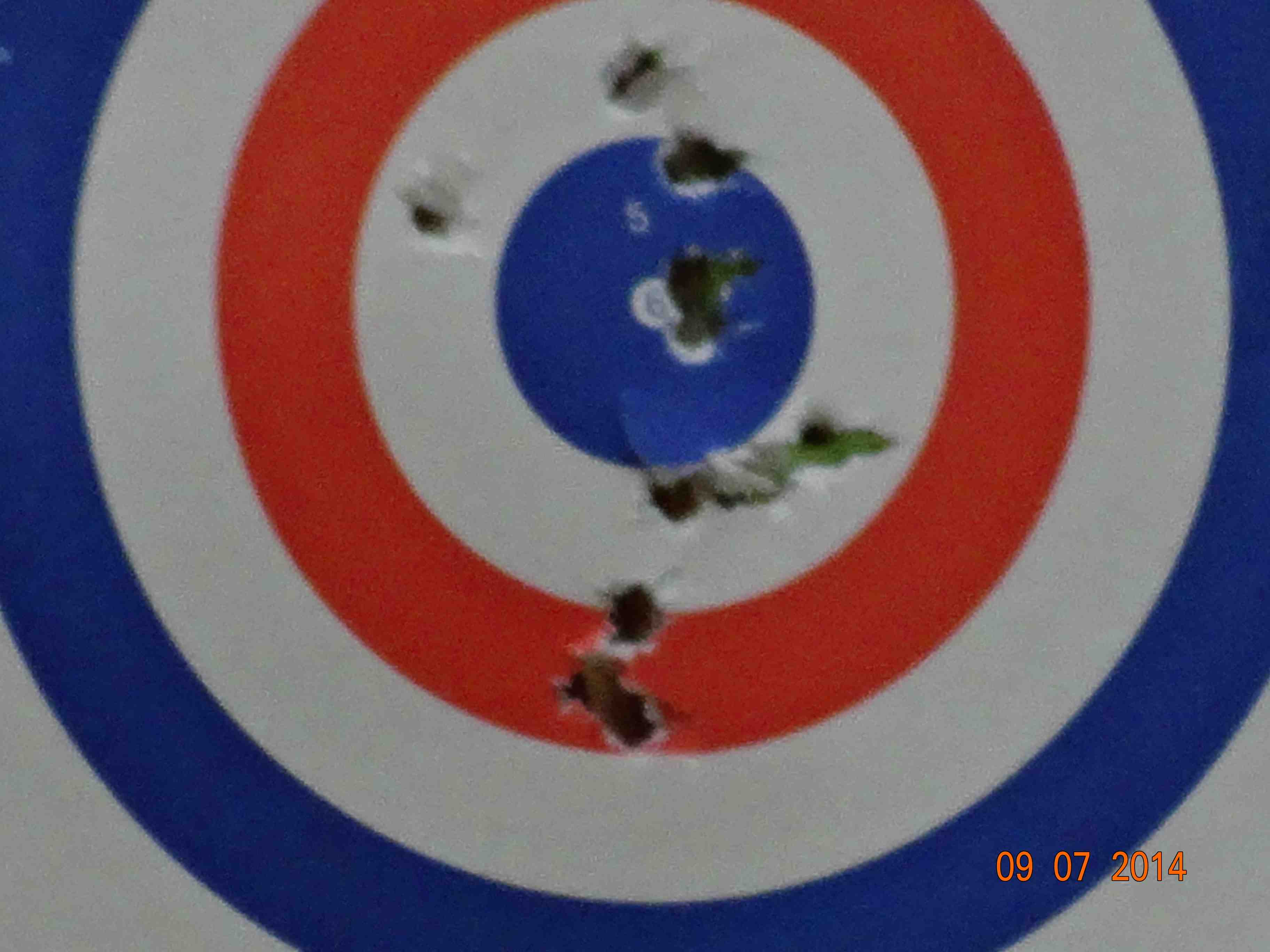 When we in the UK at the end of May, my son-in-law Paul got me an air rifle. I hadn't used it until last Wednesday as I couldn't lift it. Still can't lift it properly but here's the results of my first attempt at it resting on the back of a chair.

I've no idea how far the target should be from the rifle. The web ranges from 8 metres to 20. This target was 11 meters. The rifle has a telescopic sight, set up by a chap in Sheffield that I have known for 20 years but Paul knows very well as he has a gun shop at Malin Bridge called Browns Lock, Stock and Barrel. It's spot on by the looks of it.